The Sound of Running Water–Butedale Cannery 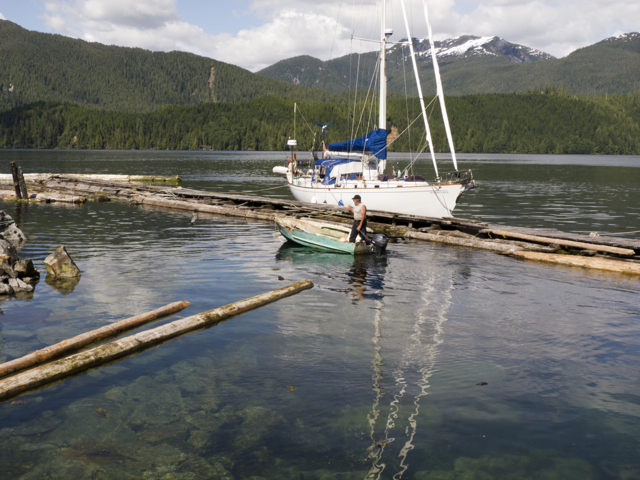 We had planned to sail by Butedale, and rush onward to the hot springs at Bishop Bay.  But as we rounded the corner into Fraser Reach, BC Ferry’s Northern Expedition headed towards us, forcing us in closer to Princess Royal Island, towards the cove where Butedale is located.  At the same moment, a man crossed our path in a ramshackle launch, dragging a few logs behind him.  We thought he came a bit close to the ferry, but he waved to the bridge, as if he and captain and crew were old friends—which, we later thought, they probably were.

By then we could read the faded sign: “Butedale Marina–hot showers, ice cream.”  Right, we thought, that will be the day.  We edged into the bay behind a yellow sailboat that tied off at the long rough form of a dock built from rows of logs and boards tied and chained haphazardly together.  We still were not sure we wanted to stop.  We called out to the other boaters, “Is there good water?” They pointed to a wooden trough over which a stream of water gushed, then dropped into an old black hose.  Nearby, a raging falls boomed and sprayed into the sea.  “Looks like lots of fresh water,” we said to ourselves. It’s good not to miss an opportunity to fill your tanks.  So we pulled up to the ramshackle dock and tied up, just as the little launch arrived with its cargo in tow.  And that’s how we met Butedale Louis. 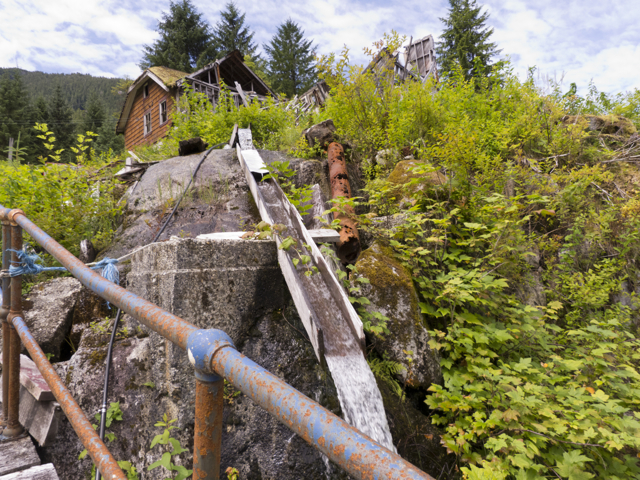 water gushes through a wooden trough

Butedale was once the site of extensive lumber and mining operations, as well as a booming salmon cannery, where hundreds of workers at a time had been employed between 1911 and the 1950s.  Then, as with so many canneries up and down that coast and on our own Atlantic shores, as refrigeration became commonplace, and the larger vessels began to process their own fish, the big canning plants became redundant. They reduced their operations and then closed.

In Butedale, many of the buildings still stood, although in a state of flagrant disrepair.  A boiler shone out from one building, which was missing an entire wall.  The roof caved in on a huge rooming house, and another wall was shattered.  Large wharves were crumbling into the sea.  Yet a few houses and outbuildings still stood.

Remains of a boiler

Louis lived in one, with his cat, but his dream of running a marina, and offering rustic cabins for rent, was fading.  Still, he worked hard to keep things up.  He’d planted a garden with flowers and vegetables, and two cabins were furnished and starkly hospitable.

Butedale Louis on his porch 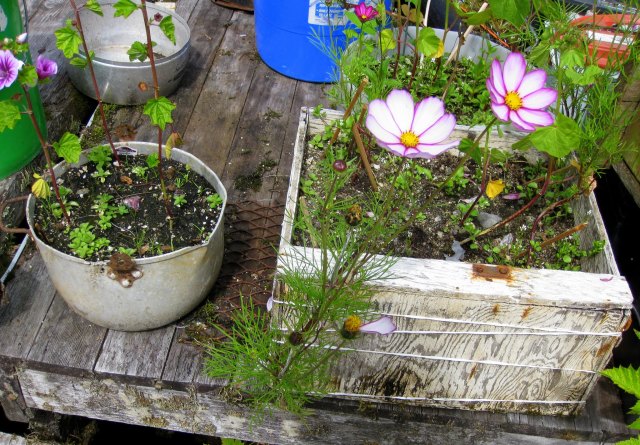 He kept some trails cleared and mowed paths between the various buildings. 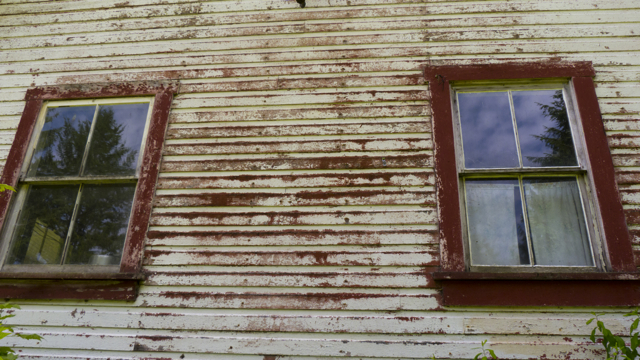 Louis also collected old movies and videos, and watched for Kermode bears—he’d made a video of one playing with a bucket on the beach.  And he kept the power supply going in the old power house over Butedale Creek, just above the falls.  The old wheel still turned, but the generator was now hooked up to a 12 volt alternator that powered Louis’ house and fridge and two outdoor lights, which he never turned off.

Empty cupboard in the power station

Once a little railway had connected the factory’s buildings, transporting workers and goods to their designated stations.  Apparently Butedale had been a segregated site; workers had lived in  separated “villages,” according to the racial designations of the day: “Japanese,” “White,” or “Indian.” The forest was already reclaiming “Japanese” and “Indian” housing zones.  Now birds called wildly in the trees, and we watched for bears in the berry bushes along the paths.  The ghosts of bustle rang from so much derelict machinery, but the people were almost all gone.

Once it was possible to catch, clean, and freeze the fish on a boat, and rush it back to the city for sale, no one needed an island outpost in the middle of the fishing grounds, so far from roads and markets and demand. Butedale was a relic, and even water and ice cream and wilderness experience seduced few visitors. It seemed most important these days as a stopping place for kayakers or boaters like us, and as a safe mooring for fishermen in small boats racing back to Bella Bella from the Skeena River. It offered a night off of watch,  a respite from vigilance or bad weather.

Louis, it turns out, was Quebecois, originally from La Beauce.  He wouldn’t say why he had left home, whether love or work or a sense of adventure had taken him west. According to Louis, Butedale’s owner is a grumpy, elderly Californian man who doesn’t want to sell, but also isn’t prepared to try to preserve the place.  He had let Louis come every summer from Kitimat, to try to run a marina in Butedale.  But now that the government was demanding that the cannery wreckage be cleared from the water and shore–no small task or expense–the owner seemed to want to collect some dues from Louis, or at least oblige him to do some remedial work. 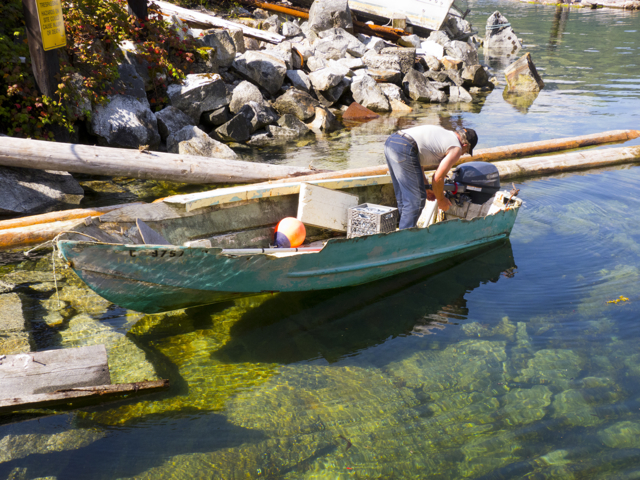 Louis at work in his launch

We should have recorded Louis; many of his stories were hilarious and full of voices—he imitated all of his interlocutors.  The stories were almost all about how le petit gars de la Beauce (the little guy from La Beauce) outwitted some stupid bigwig.  Or put him in his place.  Or else about fighting with local Haisla people—Butedale is at the southern edge of traditional Haisla territory.  In fact, the Haisla name for Butedale is C’idexs, which means “runny diarrhea,” thought by some to refer to the many berry bushes in the area, or what happens if you gorge on too much fruit.

Some of Louis’ art

Louis was clearly depressed from his solitary life in Butedale; he tried to keep himself busy by burn-etching copies of First Nations artwork on slabs of board, then painting and selling them to passersby.  Such imitations did not stop him from telling stories about how he “cussed up the Indians” every chance he got.   Still, did not want to move back to Kitimat; he seemed to like his status as the keeper of Butedale; he even relished his title, “Butedale Louis.”  And he particularly liked female visitors, so we were treated quite well. We even begged some rhubarb from his garden to make rhubarb crisp, which we shared with him and the sailors in the yellow boat docked in front of us, who were enroute from Alaska to retire in Oregon.  The world is full of such intrepid adventurers.

After visiting the power house and shooting many photos, we hiked up a path through the rainforest.  The trail wound past huge trees and the remains of a large logging operation to a mountain meadow and then stopped at the lake, where we scrambled over fallen logs and by silver snags to the open water.  The day was hot and we’d hoped to swim, but the lake was so clogged with logs and bark and debris that we gave that project up.

Louis asked for $50 a night for his ramshackle dockage but could be bargained down to $25.  At night, under the moon and a clear sky, the abandoned factory rattled with ghosts and wracking losses. A fascinating, but hard place to stay.

Our tanks full of fresh water, early in the morning  we were ready to sail on to Bishop’s Bay for a bath in the hot springs.

And yes, the sign was honest advertising.   Louis’ Butedale Marina still does offer ice-cream and hot showers.  At your own risk.

Statement about the significance of the Butedale Cannery as a heritage site in the Regional District of Kitimat-Stikine  http://www.rdks.bc.ca/content/regional-district-community-heritage-registry?q=node/58

For information on the Haisla Nation, see http://haisla.ca/

Karin Cope lives on the Eastern Shore of Nova Scotia. She is a poet, sailor, photographer, scholar, rural activist, blogger and an Associate Professor at NSCAD University. Her publications include Passionate Collaborations: Learning to Live with Gertrude Stein, a poetry collection entitled What we're doing to stay afloat, and, since 2009, a photo/poetry blog entitled Visible Poetry: Aesthetic Acts in Progress. Over the course of the last decade, with her partner and collaborator Marike Finlay, Cope has sailed to and conducted fieldwork in a number of remote or marginal coastal communities in British Columbia and Mexico. Their joint writings range from activist journalism and travel and policy documents, to an illustrated popular material history of the Lunenburg Foundry entitled Casting a Legend, as well as their ongoing west coast travel blog, West By East.
View all posts by Karin Cope →
This entry was posted in 2012 and tagged Butedale, Butedale Falls, Butedale lake, Butedale Louis, Butedale Marina, canneries, Fraser Reach, Haisla Nation, ice cream, Kermode bear, logging, North Coast BC, powerhouse, Princess Royal Island. Bookmark the permalink.

7 Responses to The Sound of Running Water–Butedale Cannery