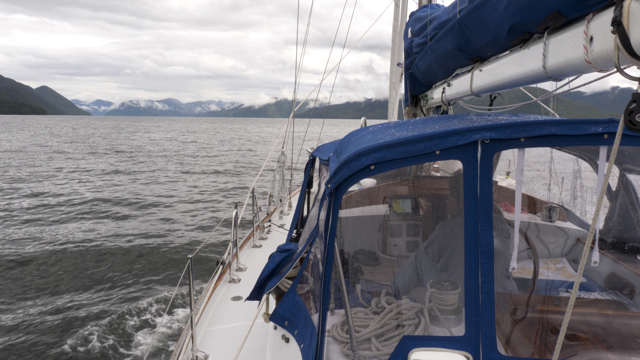 A pattering of rain all night, but come morning, there were glimmers of sun.  The fog lifted, the wind rose; we could see and count the mountaintops. And then they disappeared: fog and rain closed over Klemtu and Tolmie Channel as we passed the village and ran on out and up the far reaches of Finlayson Channel to Heikish Narrows. 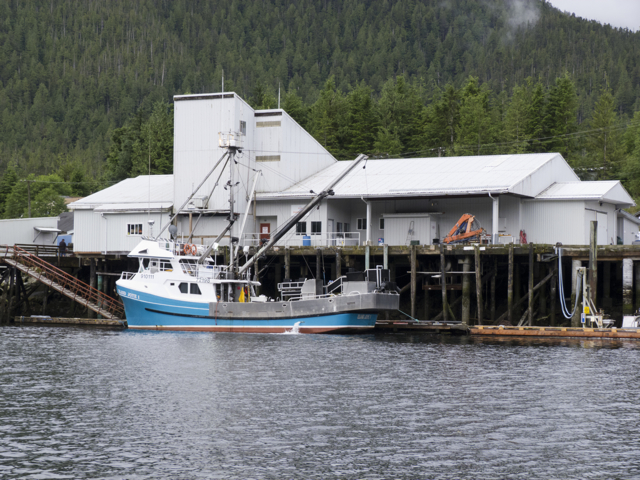 We had intended to stop at Klemtu village to see the town and take on water, but could not sort out where we could dock.  Several sailing vessels were pulled in to a dock near shore, but there didn’t seem to be room for another boat; a little further along we saw a large wharf and buildings that belonged to Ocean Harvest, a Norwegian open pen salmon feedlot operation. It looked like fish were offloaded here from nearby pens and processed for shipping out on the ferry. 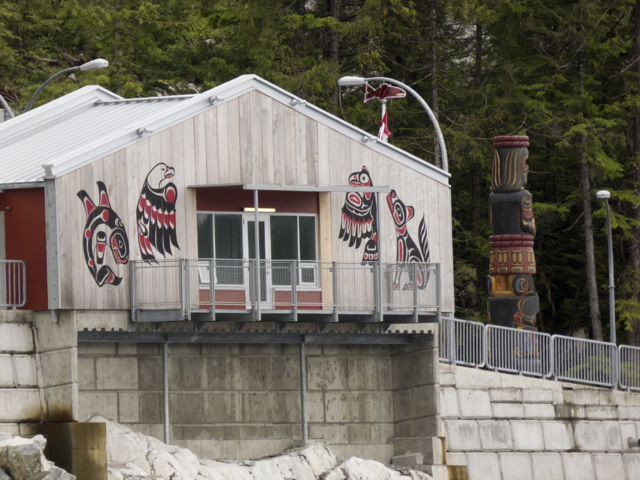 A grand new BC ferry dock towered over us just outside of town and power transmission lines ran over the mountain from a hydroelectric dam.  Wifi—messages thumped into the telephone’s inbox as we passed by Klemtu. 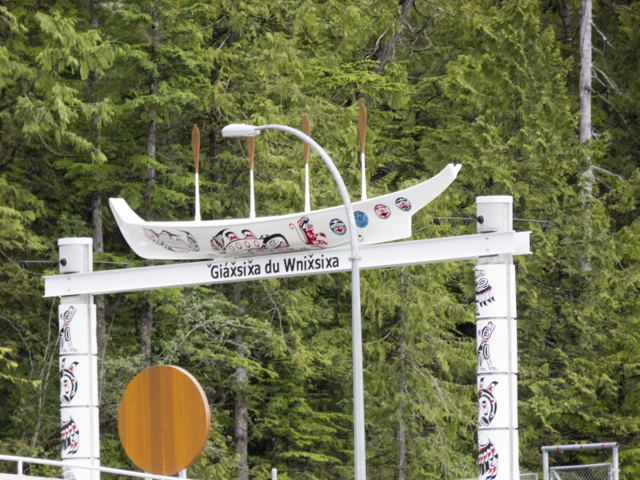 The village is home to around 500 people who are descended from the Kitasoo tribe of Tsimshians, originally from Kitasu Bay, and the Xai’xais of Kynoc Inlet, who are Heiltsuk.   Residents of Klemtu live together as the Kitasoo/Xai’xais Nation, which is a member of the Oweekeno-Kitasoo-Nuxalk Tribal Council. Apparently, Klemtu gets its name from “klemdoo-oolk,” a word which means “impassable” in the Coast Tsimshian language, though whether this refers to the steepness of the terrain, the narrowness of Klemtu Passage, which runs between Swindle Island, where the village is located, and Cone Island, or the sometimes dense fog we saw there, we couldn’t say. 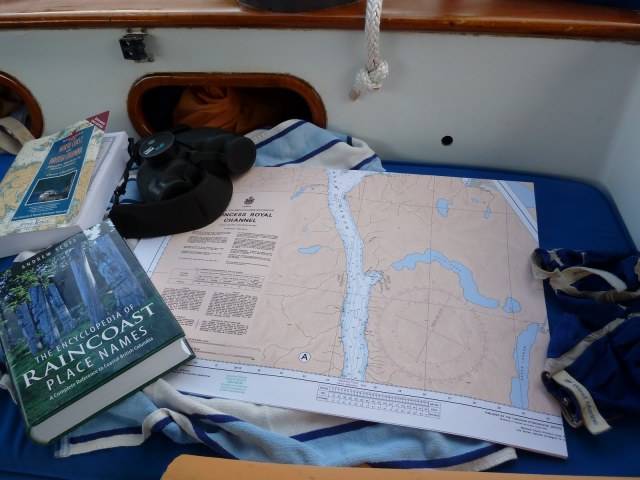 Most of the fjords and waterways of the Inside Passage in British Columbia are extremely deep, with few hidden reefs.  But one rock in Finlayson Channel interested us, perhaps because of its name. As Quoddy’s Run pinched around Ohio Rock, Karin, who was born and raised far from the sea in the US state of Ohio, read aloud from our cruising guide.  Here, in 1909, the Alaska Steamship Company Ship, the SS Ohio, struck an uncharted rock. To avoid sinking in the deep water, the captain ran the vessel across the channel to Carter Bay, where he managed to ground her in time to save the lives of all but four of his 214 passengers and crew.  We read that the same captain foundered a second time in Haida Gwaii.  Then on the way back to Vancouver as a passenger on another ship, he committed suicide by jumping overboard.  It was not hard to identify with that man, we thought. Despite the support of GPS, radar, accurate mapping and all sorts of navigational aids, as well as pretty accurate weather forecasts, we still had to be on our toes in these waters.  Anything could happen, and sometimes did. 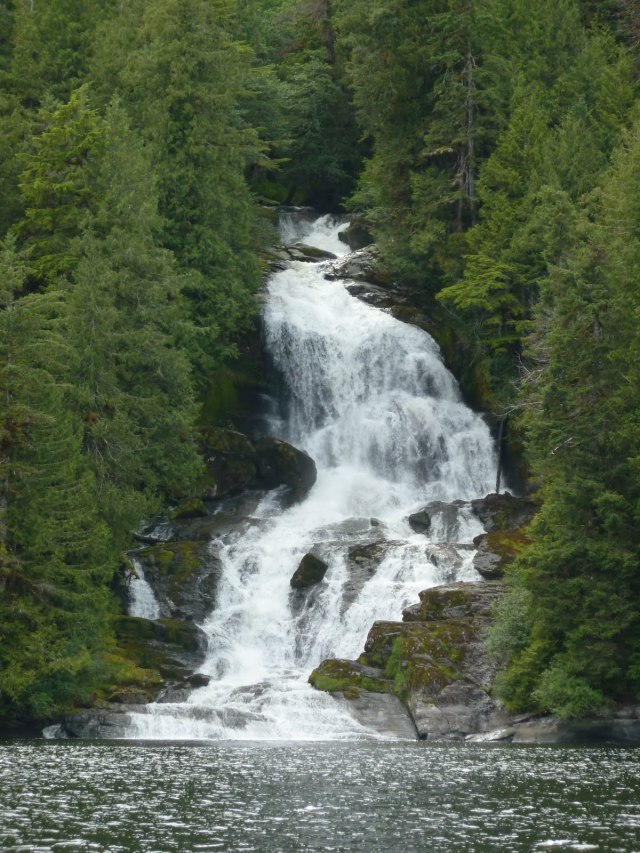 One of hundreds of cascades

As we motored up Finlayson Channel, overcast skies gradually thinned; although the weather forecast spoke of rain offshore, we were headed inland, into the mountains.  We found that changing currents took a long time to catch up with a change in tide.  We were slowed down by the current pushing against us for a long while, but finally, happily, screamed through Heikish Narrows with a boost of 3 knots.  We got quite a ride; strong eddies swirled all around us. Apparently a few years ago, so our guidebook said, a NOAA research vessel underestimated the power of the currents and was washed up against the rock wall on one side of the narrows.  We saw that vegetation was still scraped away where the boat had struck. Here, too, we saw many logs and deadheads–ours to avoid, while the gulls gleefully rodeoed them through the eddies.

We cross paths with Northern Expedition

As Quoddy’s Run shot out into Graham Channel, the clouds lifted, the sun came out, and we were surrounded by glistening snow-capped mountains and steep cascades. Meltwater. BC Ferry, Northern Expedition, passed us, enroute from Port Hardy, Bella Bella, and Klemtu to Prince Rupert. We hailed them to learn their schedule.  We would see them again and again in these waters, on their speedy trips back and forth. 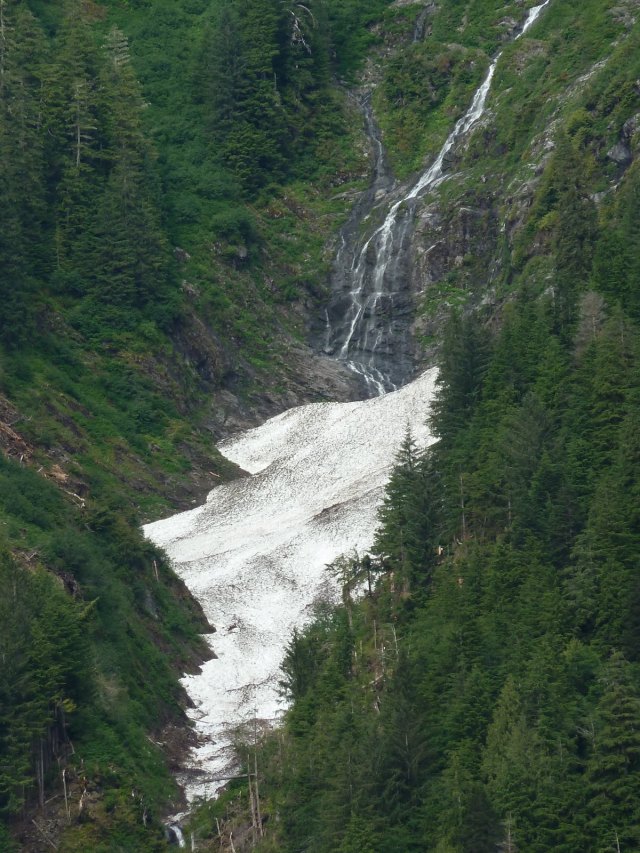 We were watching for the place where the Canoona River, flowing down from Canoona Lake, turns into the low, broad, terraced Canoona Falls, which are quite distinct from the hundreds of other falls along the way. Debris littered the sides of the river and the falls, the remains of forestry and canning operations, and once much denser human habitation. 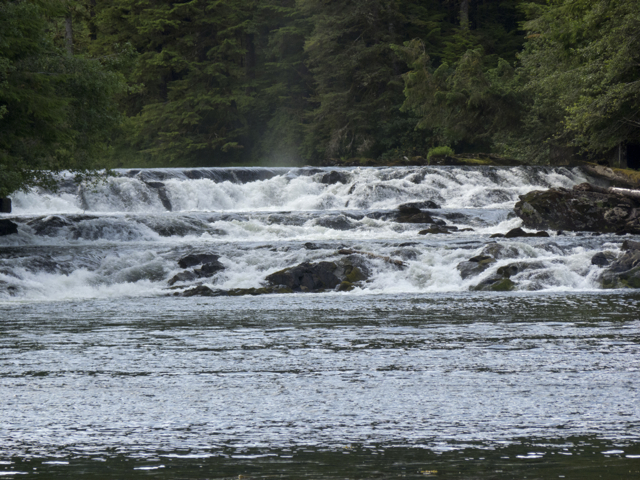 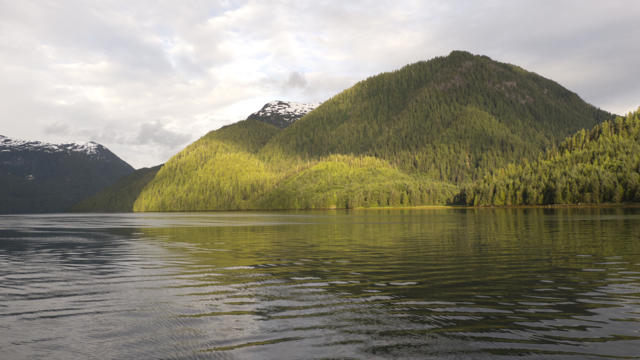 All around us, snowy peaks glittered in the sun.  We watched for bears, but only spotted seals chasing leaping salmon; we saw and heard eagles, gulls and ravens.  Everywhere, the sound of running water.  Cascades poured down the mountains from snowy patches or lakes at high elevations.  Whirlpools twisted around the boat, but the current held us in place. 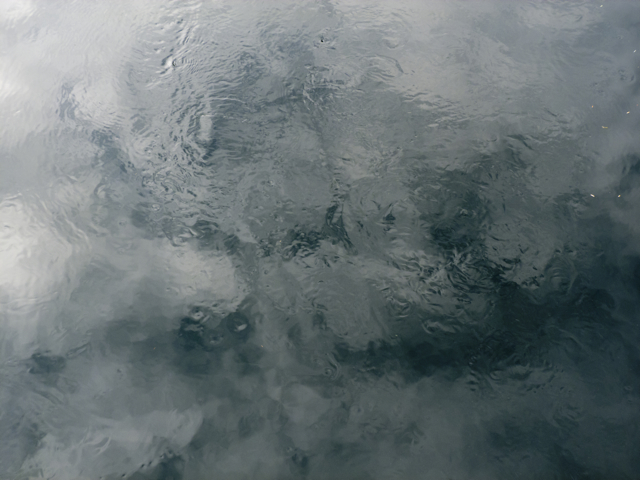 Looking down into a Khutze whirlpool

A few trawlers motored into Khutze, but passed us and went all the way to the base of the inlet. Two or three days later, a passenger on a luxurious yacht would tell us that grizzlies come out to forage there at dawn and dusk.  A small white cruise ship, golden in the evening light, throbbed north up Graham Channel towards Alaska. Loudspeakers aboard blared a message; we were glad to be on our slower, quieter boat. 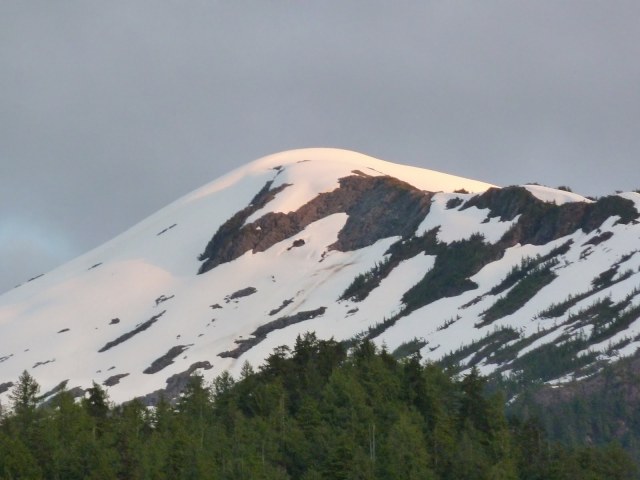 At sunset, light tumbled from the clouds and over the peaks, illuminating first one, then another, then winking out. And then another ray fingered out, tossing a rosy wash over snow and rocks and trees. Water and valleys dropped gradually into darkness; at 9:45 pm, just the heights were aglow.  Tide and current went slack. Soon, we thought, the light would fade and we would turn. Night. 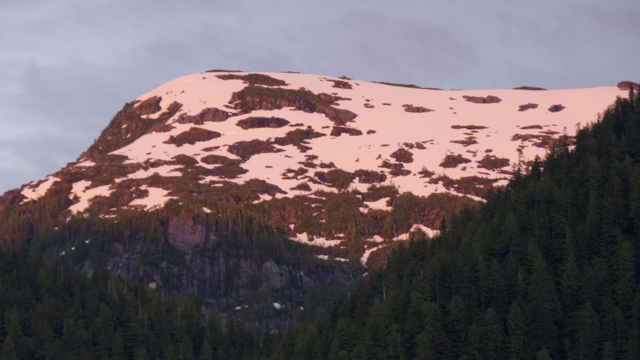 But we did not turn.  The gulls gathered at dusk and then as the current picked up again, around 10:30 or 11 pm, they began to ride those streams out of the harbour. It gave us the sensation of racing by them, but we were fixed, and they were moving. Light played over the peaks until after 11. None of us wanted to miss a second of all of that glory; we peered out at the light until the last peak flared and darkened and no more photographs were possible. 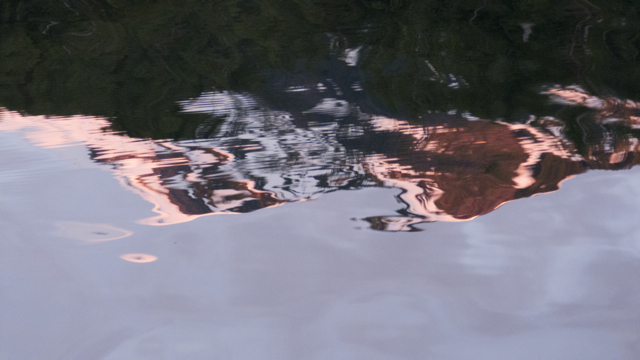 Then as we were lying in bed, just drifting into sleep, came a sound, a sort of fluting, ethereal music of one or two notes, in the water.  A little slapping and movement of the hull.  Who’s singing we wondered?  Could that be a whale?

The singing grew fainter, and then stopped as the rocking of the hull ceased.  We heard it again at 2:30—Karin went out onto the deck to take a look.  Nothing there, just stars in a night sky and the mountains towering over us.  Hard to know if we are imagining things, hearing “music of the spheres,” or our own music of the waters.

Karin Cope lives on the Eastern Shore of Nova Scotia. She is a poet, sailor, photographer, scholar, rural activist, blogger and an Associate Professor at NSCAD University. Her publications include Passionate Collaborations: Learning to Live with Gertrude Stein, a poetry collection entitled What we're doing to stay afloat, and, since 2009, a photo/poetry blog entitled Visible Poetry: Aesthetic Acts in Progress. Over the course of the last decade, with her partner and collaborator Marike Finlay, Cope has sailed to and conducted fieldwork in a number of remote or marginal coastal communities in British Columbia and Mexico. Their joint writings range from activist journalism and travel and policy documents, to an illustrated popular material history of the Lunenburg Foundry entitled Casting a Legend, as well as their ongoing west coast travel blog, West By East.
View all posts by Karin Cope →
This entry was posted in 2012 and tagged BC Ferries, bears, Heikish Narrows, Khutze Inlet, Klemtu, Northern Adventure, Ocean Harvest, Ohio Rock, salmon, SS Ohio, sunset, whale music. Bookmark the permalink.