Back in the shadow of land life 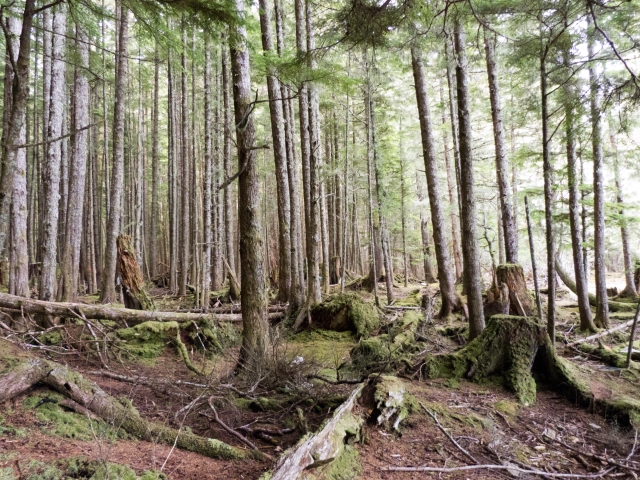 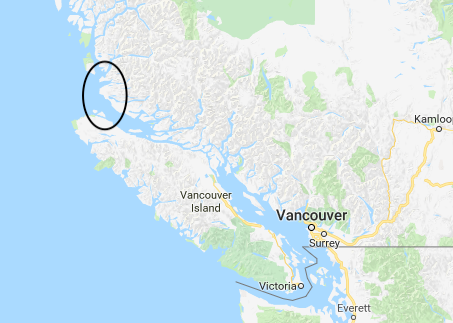 The full moon, the wind, the whir and clatter of the windmill and the half-dream chatter of our thoughts plait into an insomniac braid. We are back in the shadow of Vancouver Island, after an extraordinary 70 mile voyage from Pruth Bay today, most of it under sail. Fast, the boat thrumming at hull speed, singing, surfing the waves before a northwesterly wind.  Humpbacks rolled alongside us early in the voyage and sea lions inspected the bow once we were in Queen Charlotte Strait.  You look; you think “it’s a log and we’re going to hit it;” suddenly there’s a face and then a dive.  The sea lion resurfaces, looks sharply at us and dives again.  Still later we saw another sea lion being pecked and pursued by gulls–suddenly it heaved its bulk up out of the waves and snarled at them, waved a flipper, dove, but still they kept after it. 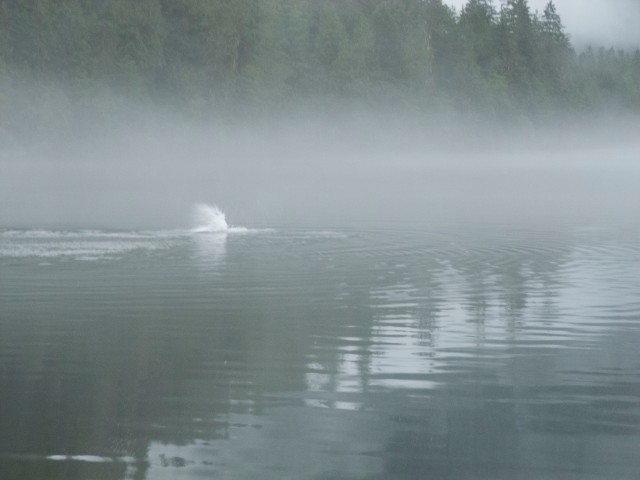 Something goes splash in the fog

The wind was supposed to have died down this evening but it seems not to know that–some larger vessel, a tug or a fishing boat perhaps, has tucked in behind the island and its very bright light swings in the night as we all yaw in the wind. We peer into the night with a flashlight but it can’t probe the darkness or outshine that light, so what swings behind it remains blank. Dark. Unknown. Our own thoughts are almost as obscure. 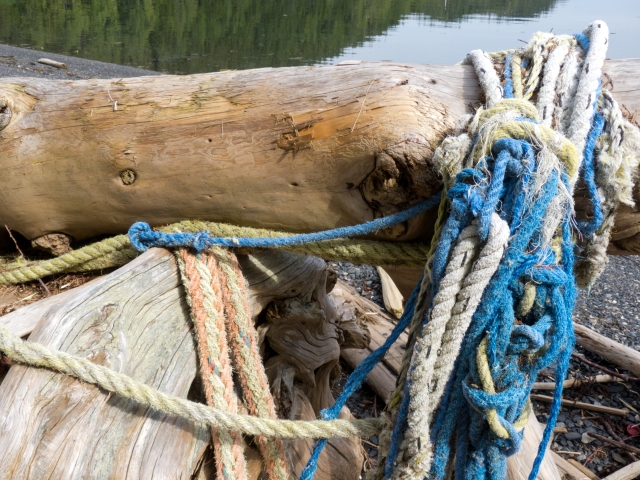 We’re up, but why? Is it just the wind rattling us? No. It’s the fact that we’ve crossed over, passed through the Queen Charlotte Strait; we’re only a few days away from a stopping place now.  There are airline tickets to book, tasks to schedule, rafts of projects to catch up on, a shift that will have to take place in our thoughts from ‘here’ to ‘there’–which will soon enough be a ‘here.’ We don’t want to rush it, so try not to peer too deeply or let ourselves get too inhabited, yet, by the relations of the land we must till more closely again soon. 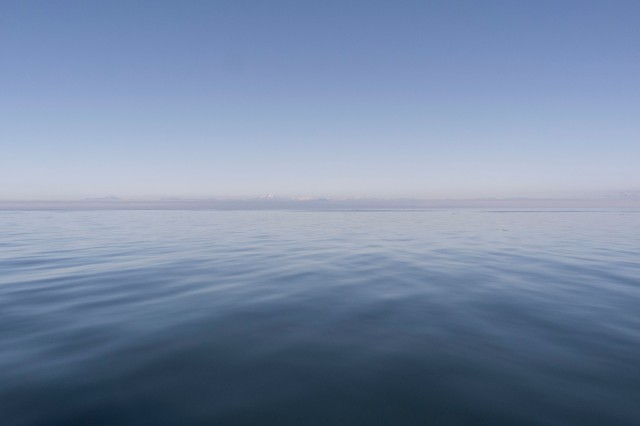 A sudden feeling of claustrophobia this morning as the fog closed in around the foot of Calvert Island.  It cleared and then closed in again for a time around Egg Island (as always–this surely must be one of the foggiest islands on the coast)–in fact we decided to cross to the west side of the Strait because Nigei and Hope Islands seemed to be in clear light. 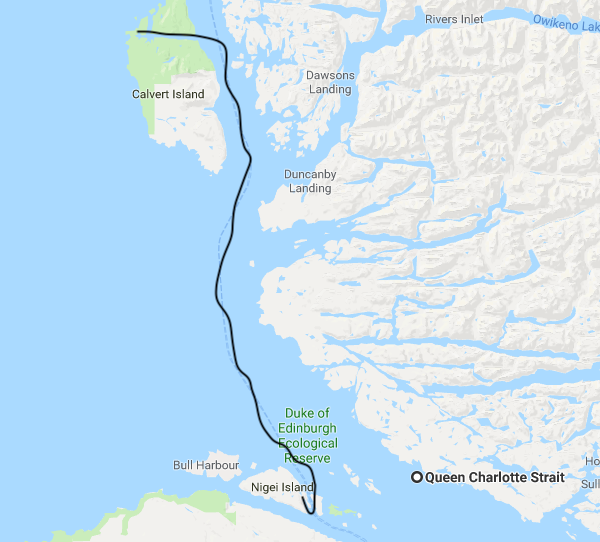 Yesterday as we were walking the beaches at Hakai, we wanted just to go on, to stay, to embark on new water-borne projects; we were full of ideas and sunlight and crashing waves and expansive possibilities.  We feel as if we’re just getting started; it seems to too soon to turn back. But then too, the other parts of our lives beckon.  We miss the dog and the cat and the clarity of the August light in Nova Scotia, the ease of living in a house on the land.  We’ll be back, but it seems forever from now.

We look up from our middle-of-the-night vigil. The fog is clearing. The moon is bright, so bright we think we can hear it sound upon the water. 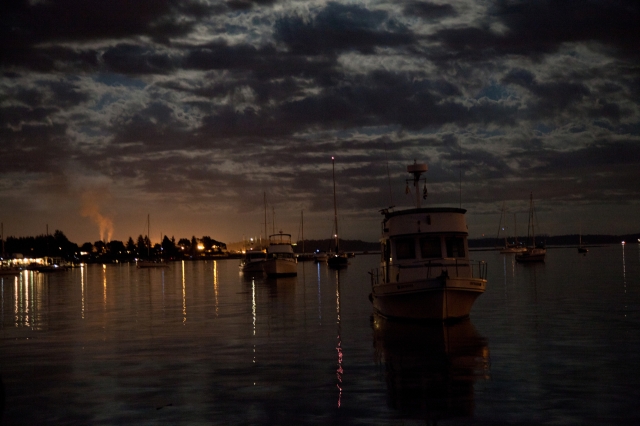 We return to Nanaimo and every other return from every other summer washes over us. The headlong rush from watery wilderness, wind, a certain coolness, the sound of birds crying or calling dumps us into heat, diesel fumes, voices chattering and laughing, sirens, flashing lights, clearly demarcated borders and limits, bridges arches ferries dock, ribbons of highways, the stench of tar, screeching tires, beeping demanding telephones and messages. It’s like crossing a border from a world in which your thoughts and actions count, into one in which you are pure reactiveness. The shift is both painful and exciting. 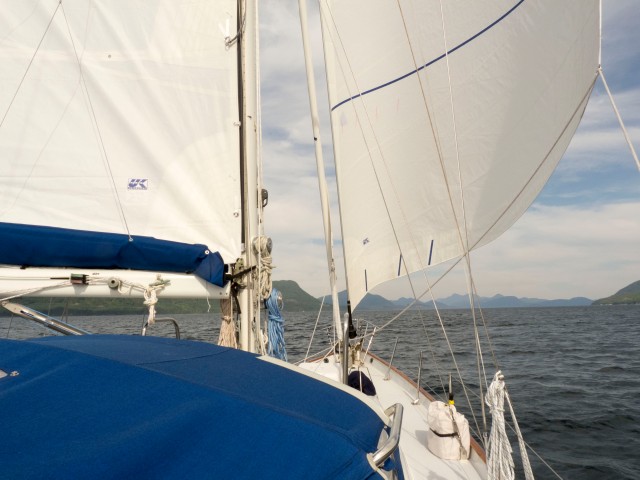 We bombed in under sail after a glorious crossing of the Georgia Strait, clocking speeds of 10 knots and more, speeds we’d never have imagined, and the din of activity around us is overwhelming. One ferry crosses the path of another; a third intercepts them from another point; small boats flit hither and yon; other sailboats weave in and out of various passageways.  The buoys blink red and green; a barge stacked high with crushed car bodies is anchored in front of a large log boom tended by two tugs; a float plane starts towards us and then stops, turns and heads the other direction into a takeoff, while another plane lands behind us and taxis to its dock. Meanwhile a kayaker runs along close to land; the harbour police are out and voice shouts on the radio, “Hey slow down!” “Reduce your speed in Nanaimo Harbour to 5 knots or less!” 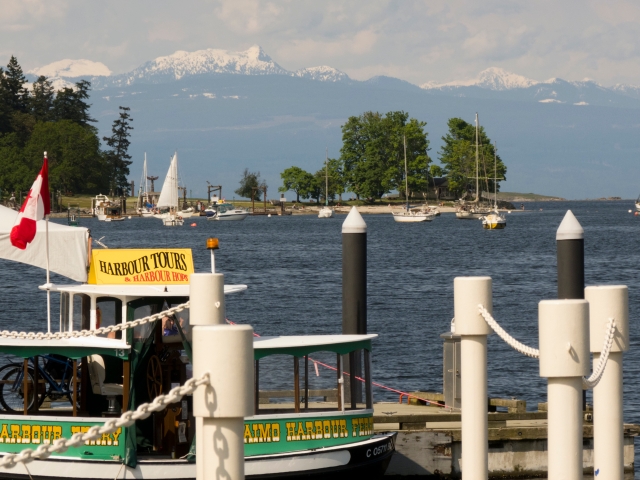 The anchorage is full; hundreds of boats of every sort and from many ports are anchored here.  We recognize a few: the well-kept ketch with the couple and four dogs; the enormous low elegant yacht from the States. The Newcastle Island ferry whips by our bow and its passengers wave; one takes a picture.  We’re part of their tourist experience now.  Authentic sailors, anchored in the port. People who have been to sea.

And we have, and it has changed us.  We’ve come back with a different view of the world–and our competencies.  Nothing will be the same again; from this point we will forever dream of a return to BC’s wilds. And next year we will come and angle further into waterways we don’t yet know and can hardly yet imagine. 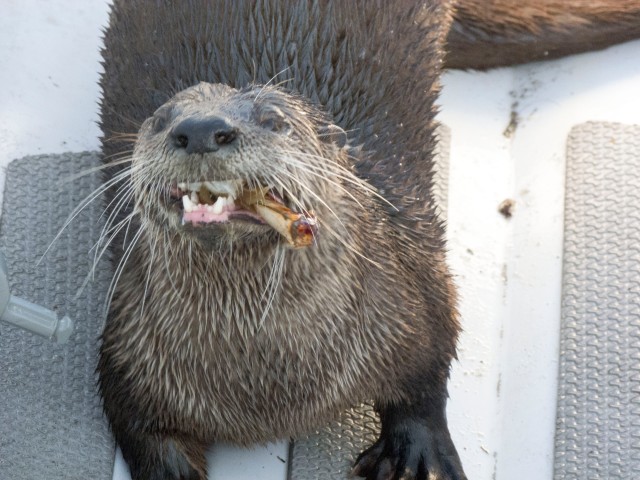 Karin Cope lives on the Eastern Shore of Nova Scotia. She is a poet, sailor, photographer, scholar, rural activist, blogger and an Associate Professor at NSCAD University. Her publications include Passionate Collaborations: Learning to Live with Gertrude Stein, a poetry collection entitled What we're doing to stay afloat, and, since 2009, a photo/poetry blog entitled Visible Poetry: Aesthetic Acts in Progress. Over the course of the last decade, with her partner and collaborator Marike Finlay, Cope has sailed to and conducted fieldwork in a number of remote or marginal coastal communities in British Columbia and Mexico. Their joint writings range from activist journalism and travel and policy documents, to an illustrated popular material history of the Lunenburg Foundry entitled Casting a Legend, as well as their ongoing west coast travel blog, West By East.
View all posts by Karin Cope →
This entry was posted in 2012 and tagged diesel, fog, land life, Nanaimo, Nigei Island, Quoody's Run, sailing, sea lions, wilderness. Bookmark the permalink.