Kayaker from Juneau in Bishop Bay

Since we began dreaming about sailing in British Columbia nearly two decades ago, among the most seductive lures were the images you find in cruising guides of sailors basking in hot springs surrounded by primeval cedar forests, snow-covered mountains looming overhead. (You know the pictures we mean; you’ve seen them: damp white people on steaming rocks beneath blue peaks.) Bishops Bay was our first experience of this west coast delight.

The breeze failed us as we arrived, so we ghosted slowly into the bay, falling well behind a Monk Trawler.  Kindly, they radioed us to suggest we raft alongside them at the dock, but we choose a mooring instead.  The small dock was crowded with a dozen colourful kayaks and an equal number of paddlers ferreting in their boats, leaping into the sea, basking in the sun, and soaking their muscles in the hot springs.  These young paddlers had come all the way from Juneau!  Our hearts opened with admiration for their adventuresome spirits.  They braved currents, wind, cold, rain, and threat of bears and cougars, in order to realize their dream of paddling from Juneau to Nanaimo. We talked excitedly about where we’d been, which was where they were going, and traded all sorts of advice. Stay in Wrangell when you get to Alaska they said. Go see Butedale Louis, we suggested; good water in Bella Bella, but not potable in Shearwater.

Sharing the dock in Bishop Bay

We were soaking together in the hot water–our first hot freshwater bath in months–exchanging tall tales, when a very large luxury motor yacht arrived, anchored, and disgorged a lighter which sped over with a crew to reconnoiter.  They looked about, sped back to the yacht, then returned with four passengers and a few crew members, a Himalaya of towels, and coolers of beer on ice.  The luxury cruisers in their neatly pressed clothing looked down at us in our tattered bathing suits in the baths.  We looked up at them, realized they’d stare until we moved, considered, and relinquished our places.

Karin decided that the top dog was in entertainment management from New York City; something about his accent and his bespoke blue canvas booties.  His carefully coiffed partner decided not to risk immersing herself in the communal waters, but was eager for conversation.

“You’ve been out there for months?  Really? What do you do?  Do you watch movies?”

After divulging that she had no idea where she had sailed, geographically speaking, she did show us a photo of a grizzly bear on her i-phone; it had been taken from the lighter early that morning at, we deduced, Khutze Inlet.  Our praise gave her a sense of achievement.  The crew were very obliging; they offered us cold beer and answered all of our queries about the workings of a 170 foot motor yacht.  One or two of them spoke wistfully to us about our trip. After all we were in no one’s hire.

It is a custom of the sea that the crew of any vessel not deny fellow sailors the necessities of life.  The kayakers, short of drinking water, had been scrounging in the forest for a spring.  Of course we would have given them water from Quoddy’s Run, but as we sat over a glass of wine on the upper deck of the Monk trawler, Marike was overcome by an attack of mischievousness.  As the crew and their charges were departing in their lighter towards a mother ship that was already preparing to weigh anchor and speed off, Marike called down to them:

“Say, you have a water-maker onboard don’t you?  The kayakers are short of drinking water.  Would you mind bringing some over for them, please?”

“But, we don’t have any container to put it in,” the mate replied.

“If you wait till I finish my wine I’ll go over to my boat and fetch one for you.”

Without answering, they sped over to their yacht and soon returned with twelve personal water bottles, full of water, each labelled with the crew members’ names.  They dumped the bottles on the dock before rushing off for good.

That evening, at dusk, while we dined in the cockpit aboard Quoddy’s Run, a pod of orcas lazily circled the bay, approaching our boat as though for a visit.

Waters are to be shared. 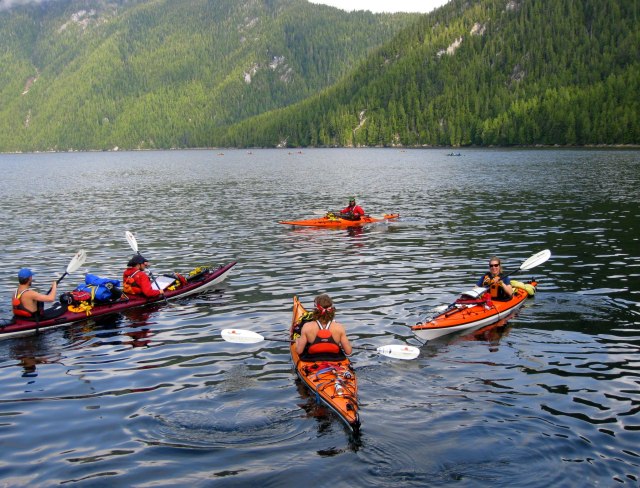 Waters are to be shared

Their account of paddling in Northern and Central BC is here http://www.atripsouth.com/2012/08/journey-on-the-bc-coast/

Karin Cope lives on the Eastern Shore of Nova Scotia. She is a poet, sailor, photographer, scholar, rural activist, blogger and an Associate Professor at NSCAD University. Her publications include Passionate Collaborations: Learning to Live with Gertrude Stein, a poetry collection entitled What we're doing to stay afloat, and, since 2009, a photo/poetry blog entitled Visible Poetry: Aesthetic Acts in Progress. Over the course of the last decade, with her partner and collaborator Marike Finlay, Cope has sailed to and conducted fieldwork in a number of remote or marginal coastal communities in British Columbia and Mexico. Their joint writings range from activist journalism and travel and policy documents, to an illustrated popular material history of the Lunenburg Foundry entitled Casting a Legend, as well as their ongoing west coast travel blog, West By East.
View all posts by Karin Cope →
This entry was posted in 2012 and tagged A Trip South, BC hot springs, Bishop Bay Hot Springs, Junneau to Nanaimo, kayakers, Kitimat, Nothern BC, orcas. Bookmark the permalink.