Getting off the Dock 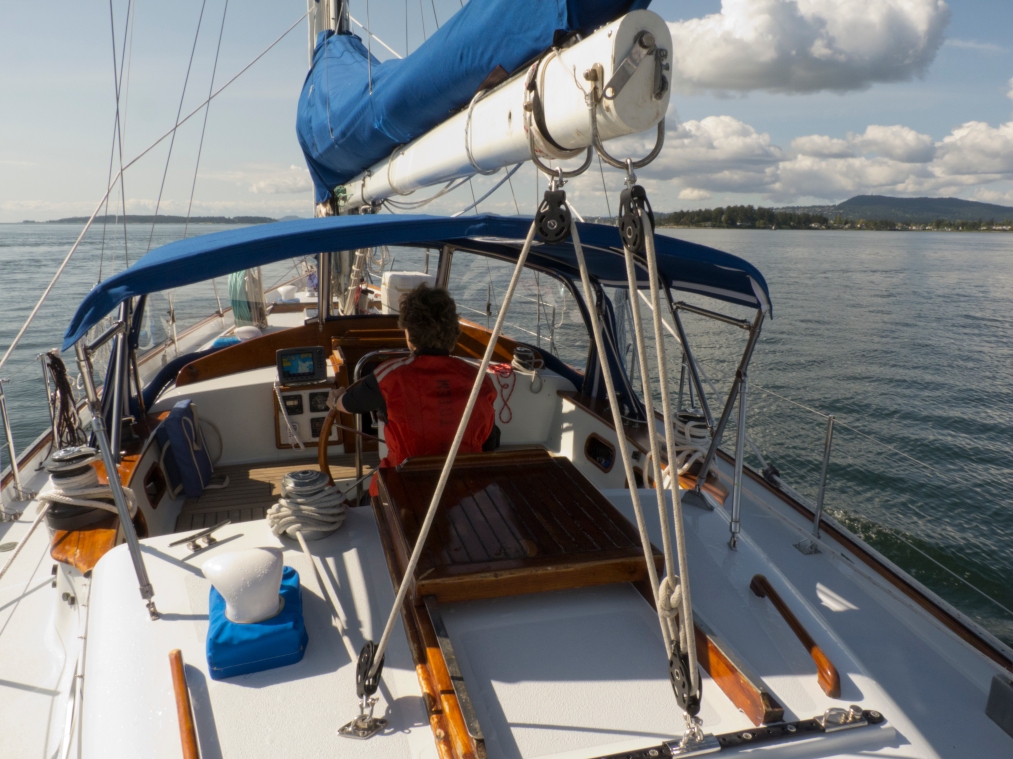 Quoddy’s Run gets off the dock!

It’s both an enormous relief and a struggle always to leave the dock.  Once we pull away, we sever certain ties with the land and its shops and roadways–as well as, in North America, simple assumptions about unlimited water and power supplies, ready access to garbage and recycling facilities, and easy telephone or internet-based communications.  Once we’re off the dock, we must carry or generate most of what we need, from food and water and fuel and electric power to trash and other wastes.  A blue water cruising boat—that’s to say, an ocean going vessel like Quoddy’s Run—must be a self-contained unit: a safe vessel for travel and then anchorage, a secure and comfortable home, and a power, water and waste managing factory.

Troubleshooting and getting all of these systems up and running after they’ve been shut down for months is quite a job.  We aim for a “best of most, safety-first” strategy in order to be able to move at all.  (This is because we’ve noticed over the years that those who aim for perfection almost never leave the dock.)  This means that we fill with water, charge up our batteries, ensure the windmill and solar panel are working, bend on the sails, go over the engine and alternator carefully, calculate how much fuel we’re carrying, fill if it’s too low, take a jerry jug of gas for the dinghy, and stow plenty of fresh food, dry goods & cleaning supplies, coffee beans, tea, wine, beer, bottled water, dry and canned milk and boxed juices. If there’s not too much dirty laundry, and nothing major (bilge pumps, radio, chart plotter, SSB, radar, gps, windlass, propane system and stove, refrigerator) broken, we’re ready to go. At least one of the two marine heads (toilets) must work, though it’s always easier to service them at the dock.  Charge up the computers and camera and sound recorder batteries. Listen (again) to the weather report. If all is well, a last top-up on the water; disconnect the power cord, fire up the engine, don the life vests, call for an extra hand in roping off the dock, and we’re gone!

We threaded through narrow channels and headed south.  The day was spectacularly clear—every mountain range was visible—the Olympics, the Cascades, the Rockies behind Vancouver, the snow covered peaks running up the spine of Vancouver Island.  What pleasure to be moving on the water again.  To be out, away from the land.

As we approached Sidney Spit, we decided to stop and anchor.  We could dinghy to shore and go for a good walk along the beach and through the woods.  No one else was there, save for two crab fishing boats working their traps.  We hadn’t gone far; we hadn’t gone where we’d intended to go, but no matter.  We were finally off the dock, free! We could go wherever the water and wind would take us, and stop whenever we wanted! 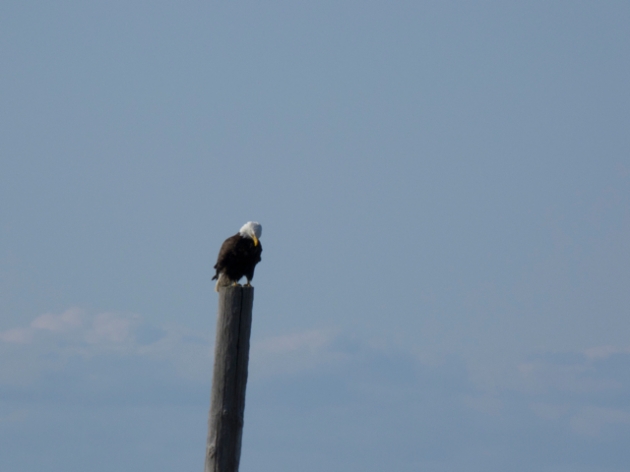 We had a rendezvous for the next day in Indian Cove, on Shaw Island, in the San Juans, with our friends Paul and Dee, but we didn’t need to rush there.  Besides, we needed to eat the rest of the fruit we had on board before we crossed the border into the US, or they’d just take it away, even though we’d carefully chosen, against our usual pattern, US-grown fruit in the supermarket.  “Nope, once it’s been to Canada, it’s contaminated!” joked the customs agent we’d called and talked to about what we’d need to do to cross the border for a long weekend. “What’s the matter?” we wondered. “Do California oranges begin to speak French once they cross the border?”  “No, they become socialists!” our friend Paul asserted. “And we know that’s not allowed in America.”  “Socialist fruits? Really? Even in Stephen Harper’s Canada?” But there the conversation stopped, because, despite his careful study of Republican party politics and his fondest wishes, Canadian Prime Minister Stephen Harper just isn’t a household name south of the border—although, apparently, socialist fruits still are. 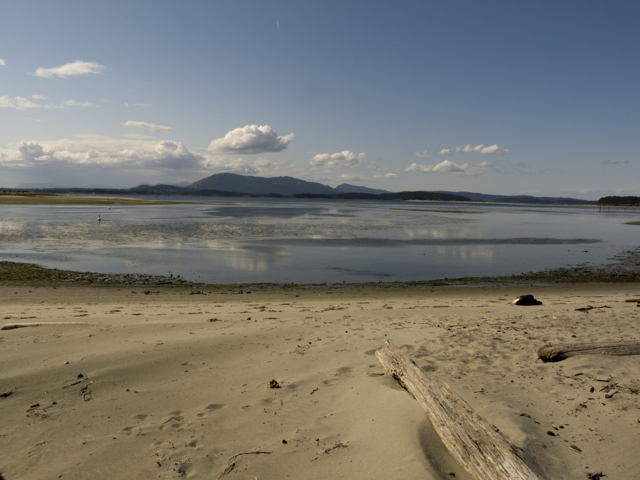 Once we arrived at Sidney Spit, we had to anchor twice because the first time where we’d dropped the hook left the boat floating above a crab fishing couples’ traplines.  We hadn’t understood that, unlike lobster traps on the Eastern Shore, each of which is set on its own, the crab traps here are set on lines, which the boats follow, quietly and rhythmically.

The couple–Leanne and Antonio–were sweet about our mistake, and sold us three large Dungeness crabs for supper. “Cook them for five minutes after they start to boil,” Leanne counseled us, “with onion and hot peppers and a bay leaf or two.” 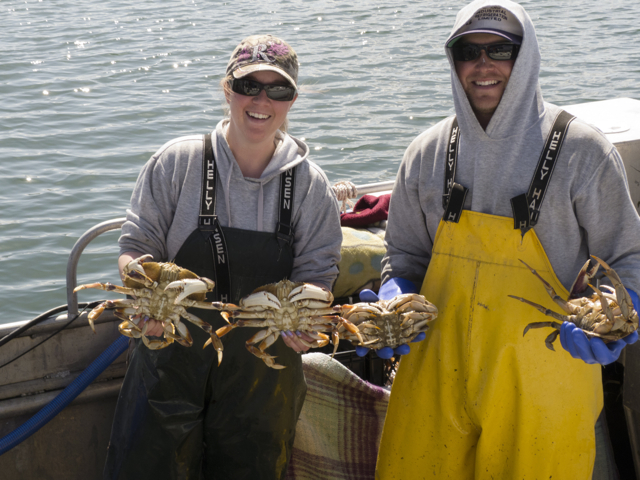 Look at those BLUE nails!

They held up some of their crabs so we could take their picture, when we noticed that Leanne was fishing with LONG BLUE star-spangled nails! Wow! Girl, you have some magnificent nails, we told her. 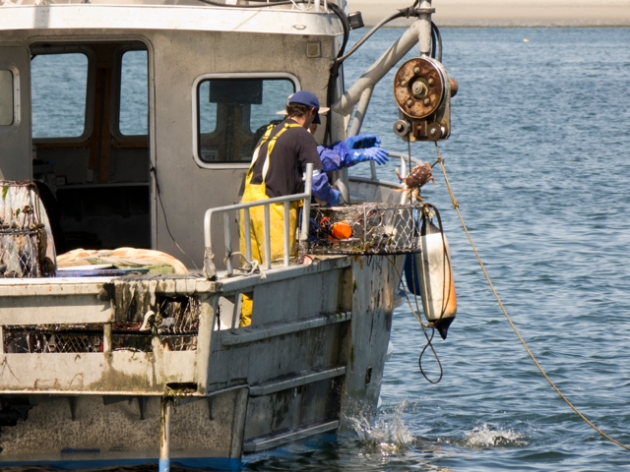 Once we re-anchored, we watched two crab boats work in the curve of the Spit.  They each drive to the head of their line and then snap the line to some sort of pulley that moves them along, trap to trap. At each stop, one person opens the trap and tosses out seaweed and other bycatch, measures smaller crabs, flings undersized ones back, and settles the crabs they will keep in a bin.  The other then picks up the trap and moves it to the back of the boat and stacks it.  When the line has been fished, they rebait and reset each trap, then move to another line, fish that, and come back. 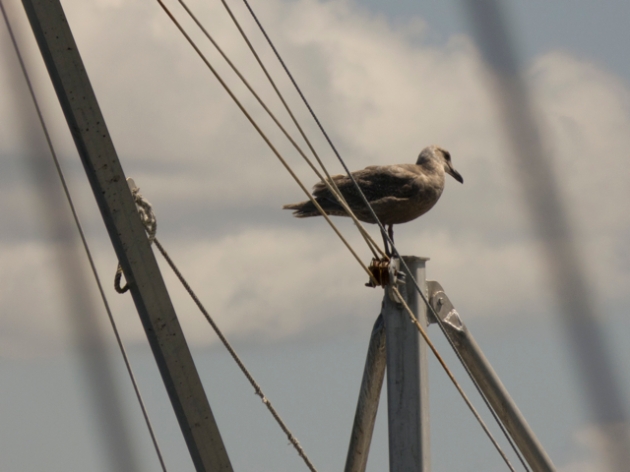 Gull hitching a ride on the crab boat

Gulls trail the crab boats and eagerly gobble by-catch and old bait.  The air on the Spit is cool and fresh and smells of saltwater and seaweed—and a trace of picked fish as the boats pass and dump their bait. 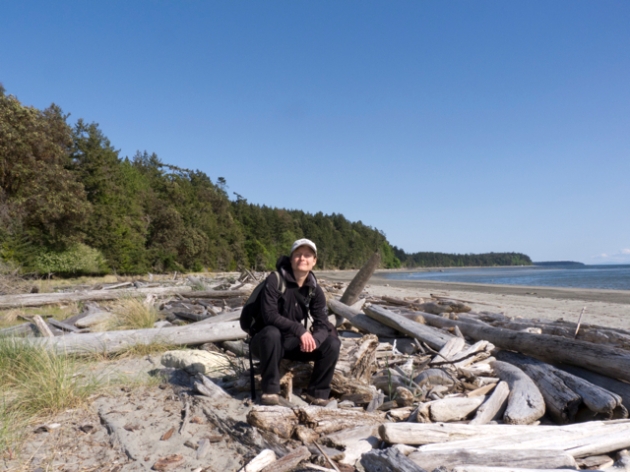 Karin temporarily anchors herself to some driftwood

In the afternoon, we kitted out the dinghy—a big wrestle to get the engine to start, but finally it kicked in—and set off.  The floating docks weren’t in yet at the Spit, one of several sites in the Gulf Islands National Park, so we ran the dinghy up a steep bit of beach and pulled it above the high tide line, tying it off to a massive piece of cedar driftwood. 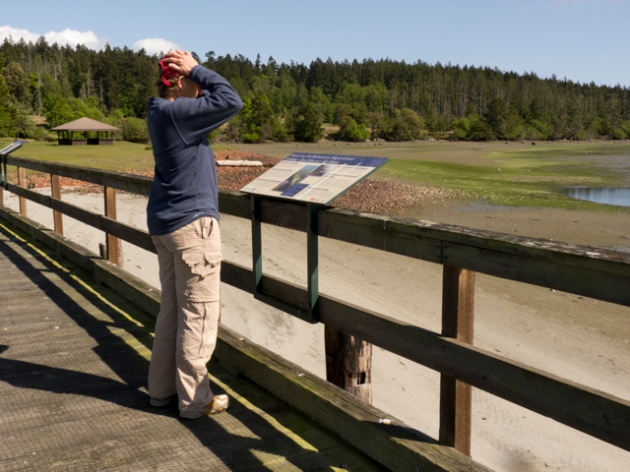 Marike looks out over the lagoon at low tide

We had a lovely long walk along the beach to the lagoon, through fields where geese were nesting—sentries crying out an alarm when they saw us—then through old growth and new greening forest to the furthest point of the park. A lone camper who had arrived by boat was sunning himself near the beach.  We caught glimpses of deer, bits of goose down, whiffs of apple blossom.  Birds were everywhere, fluttering, hovering, diving, coursing, singing. 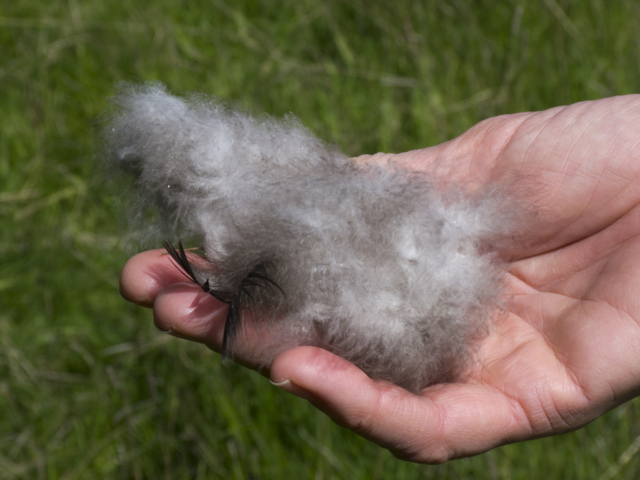 We had to get our feet wet to shove off the dinghy again, but no matter.  The water was bone-achingly cold, but the air was sweet, green, floral, cool: a perfect spring day, our first day at anchor, and fresh crabs for supper.  Nothing could be better. 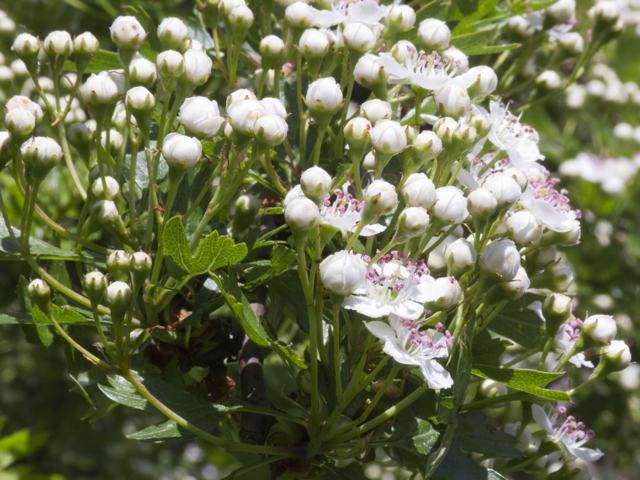 Karin Cope lives on the Eastern Shore of Nova Scotia. She is a poet, sailor, photographer, scholar, rural activist, blogger and an Associate Professor at NSCAD University. Her publications include Passionate Collaborations: Learning to Live with Gertrude Stein, a poetry collection entitled What we're doing to stay afloat, and, since 2009, a photo/poetry blog entitled Visible Poetry: Aesthetic Acts in Progress. Over the course of the last decade, with her partner and collaborator Marike Finlay, Cope has sailed to and conducted fieldwork in a number of remote or marginal coastal communities in British Columbia and Mexico. Their joint writings range from activist journalism and travel and policy documents, to an illustrated popular material history of the Lunenburg Foundry entitled Casting a Legend, as well as their ongoing west coast travel blog, West By East.
View all posts by Karin Cope →
This entry was posted in 2012 and tagged Gulf Islands. Bookmark the permalink.

1 Response to Getting off the Dock