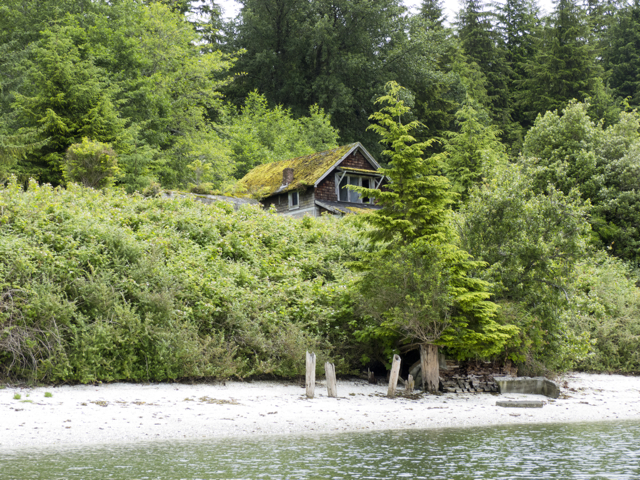 Our visit to the relics at Mamalilaculla, on Village Island, was preceded by many stories about the abandoned village, once the main winter community for the Mamaleleqala-qweqwa sot’enox people,  a branch of the Kwakwaka’wakw First Nation.  Abandoned in the 1960s in favour of deeper water settlements more conducive to fishing boats with motors and keels than the shallow, canoe friendly lagoon, the settlement had supported, in the 1830s, as many as 2000 people.  Wrecked by smallpox and other diseases carried by colonial settlers, the population had dropped to 90 people by 1911.

Mamlilaculla is famous as the site of an enormous federal potlatch raid in December 1921, when 45 people were charged with violating Section 149 of the Indian Act, which prohibited the speeches, dances, gifts, costumes, masks, coppers and other articles and activities that accompanied the giving of or participating in a potlatch ceremony. All of the gifts and regalia associated with the potlatch were seized, boxed and warehoused. Ceremonial materials were shipped to Ottawa, where they were divided between various public museums and private collections in Canada and the US. Then Superintendent of Indian Affairs, Duncan Campbell Scott, was offered some particularly choice articles for his own collection: spoils of the continent’s longest and deadliest war we might rather call them.

Why were potlatch ceremonies such a source of legal and missionary fervour?  We like to think it’s because they put into practice an anti-capitalist approach to accumulation. In a potlatch-giving society, if you become rich and powerful, you have an obligation at a certain moment to break out your wealth and share it with others in the form of lavish gifts–often of useful items like oolichen oil or blankets or shoes or motors.  Younger people were kitted out for warmth or success in fishing this way; poorer people did not go hungry, and a chief who shared richly built not only a reputation but a network of people who felt strong ties and shouldered further obligations to the community or extended family.  The ceremonies also served to mark new names or positions, marriages, deaths; they passed along stories; they recounted lives, myths, local and global histories, and they made for fantastic dancing and music and fantasy and celebration. As Agnes Alfred, of Alert Bay, said in 1980, “When one’s heart is glad, he gives away gifts…The potlatch was given to us to be our way of expressing joy.” Such dramatic non-Christian expressions of joy were clearly, as well, deeply troubling to missionaries, who wanted to supplant tales of the raven or forest ghosts with their own myths of father, son and holy ghost.

Following the potlatch raid, Mamalilaculla became the site of an Anglican mission school and T.B sanitorium, and was frequently visited by white settlers bringing what they thought of as “civilization,” curiosity and greed.  For more than a century, white writers have recounted visiting the place in search of “local colour,” trading beads or other artifacts scattered on the beach, or views of “authentic” longhouses and totems. We would be kidding ourselves if we thought our own visit was any different, really; although we tried to practice a contemporary ethic of ‘doing no harm’ or taking nothing away, we were trespassing, and we collected dozens of photographs (picturesque! of ruins!) and handfuls of the thimble and salmon berries growing rampant along the shore.

Thimble berry bushes and a tangle of nettles obscure the ruins

The day we visited Mamalilaculla, we threaded the narrow passages to a deep water cove on Village Island–“Native Anchorage” it was called on our chart–dropped anchor, put the motor on the dinghy, and made for the gleaming white shell midden beach we’d glimpsed amid an arc of islands.  It was still nearly high tide, so we slipped along the shore behind a line of spruce islets covered in driftwood and ran up the drying lagoon that fronts the village beach. We tied the dinghy to the remnants of an old dock support and stepped out. 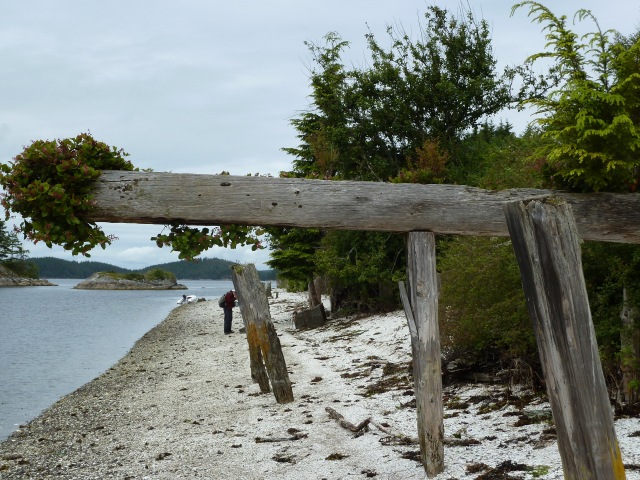 Remains of a dock at Mamalilaculla

We walked on what was shell and bottle midden now, stepping over the engine parts strewn about.

In Cruising North of Desolation, John Chappell reports seeing a half-sunken, abandoned fishing boat on the shores of Mamalilaculla in 1979; these must be its remains: crankcase, flywheel, bolts, rod.

Remains of an old engine on the beach

Behind us, as we stood on the beach and faced the village, a run of barrier islets lush with grass and a few trees, a situation reminiscent of a Pacific atoll.

Before us, what seemed an impenetrable thicket of rose and thimble berry bushes, mixed up, as we found, with stinging nettles.  Birds sang and the sound of buzzing bees was everywhere. Further down the beach, a line of cherry trees bearing as yet unripe fruit.

Roses guard the ruins of Mamalilaculla

Finally Marike found a way through the brush and we walked along overgrown paths, the thorny bushes high above our heads, to the remains of a long house–two massive supports and an equally massive crossbeam. Another massive trunk–once a carving?–stood to the side, now a nurse log for new growth. Once there we could see further back, blocked by solid walls of overgrowth, the other supports and crossbeam.

Marike stands beneath the longhouse crossbeam 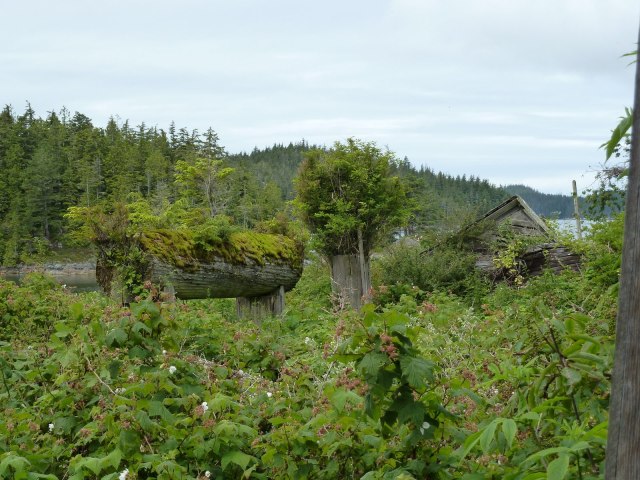 One house still stands; all of the other structures in the village have tumbled down. Bit by bit, the rain forest was reclaiming the building: moss covered most exterior surfaces, the outer steps had fallen down, and the building had begun to cant to the side. Plaster fell, paint peeled, wallpaper curled away from the mouldy walls, and a few furnishings rusted in the damp. A hopeful plea was written in pencil on a bedroom wall: “Edie Pooh. #10. Home forever? September 19, 1999.” Only the bees and spiders and mice and mould stayed now.

Rusting washtub on the porch 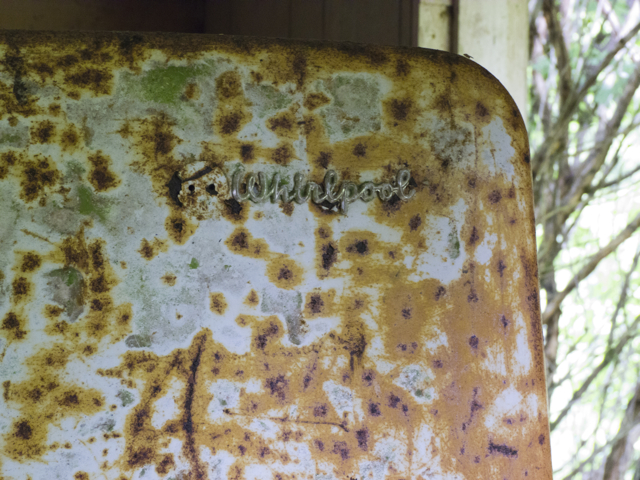 Mouldy wallpaper parts from the walls

Message on the bedroom wall

Moss takes over the roof

We explored the house and then walked along the beach towards a freshwater stream, where we found another set of steps up into the brush.  There were the moss-covered carved forms of a decaying totem pole–a sea wolf still visible, baring its teeth. 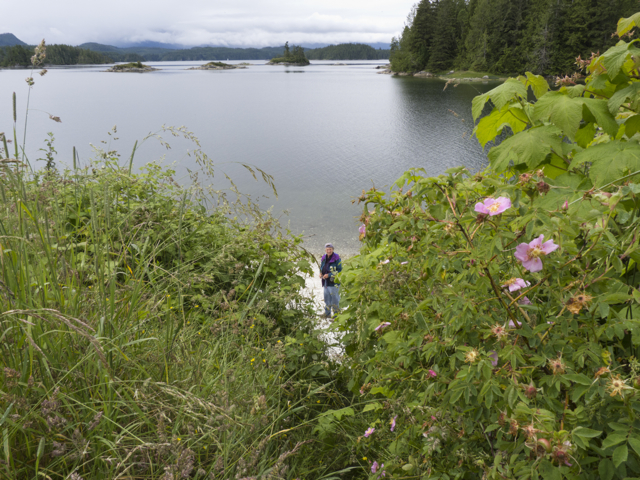 Marike stands on the beach and peers through the nettles 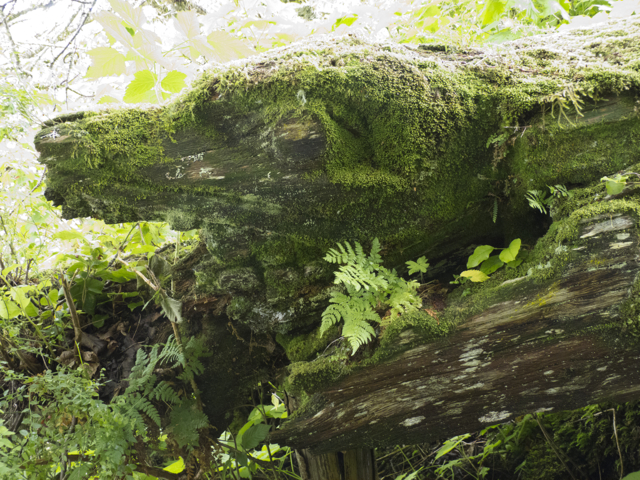 Bees and humming birds were buzzing all around us.  Elisabeth continued to photograph, while Marike hacked towards the stream and Karin headed the other way, startling several snakes and then stepping in fresh bear scat.  We turned back then, not wanting to disturb any snoozing or berrying bears.  Besides, it was time for our lunch.

We clambered back down to the beach, and shoved the dinghy back into the receding water. Time to move on before the lowering tide stranded us here until after dark.

Rusted tub on the beach

Karin Cope lives on the Eastern Shore of Nova Scotia. She is a poet, sailor, photographer, scholar, rural activist, blogger and an Associate Professor at NSCAD University. Her publications include Passionate Collaborations: Learning to Live with Gertrude Stein, a poetry collection entitled What we're doing to stay afloat, and, since 2009, a photo/poetry blog entitled Visible Poetry: Aesthetic Acts in Progress. Over the course of the last decade, with her partner and collaborator Marike Finlay, Cope has sailed to and conducted fieldwork in a number of remote or marginal coastal communities in British Columbia and Mexico. Their joint writings range from activist journalism and travel and policy documents, to an illustrated popular material history of the Lunenburg Foundry entitled Casting a Legend, as well as their ongoing west coast travel blog, West By East.
View all posts by Karin Cope →
This entry was posted in 2012 and tagged bears, Indian Act, Kwakwaka'wakw artifacts, Mamalilaculla, potlatch, ruins, the Broughtons, Village Island. Bookmark the permalink.