Looking back at Sunderland Channel

When we woke the world was bathed in a grey wash–pale sky, steely water, grey green hills, granite cliffs.  We raised the anchor and slipped out of Forward Harbour and into the Sunderland Channel.  We motored  past mountains and islands and clearcuts and fish farms in virtually every bay; the more stunning the view, the more certain we could be that we would see multiple modes industrial exploitation and resource extraction.  And then suddenly we were at the edge of the infamous Johnstone Strait. 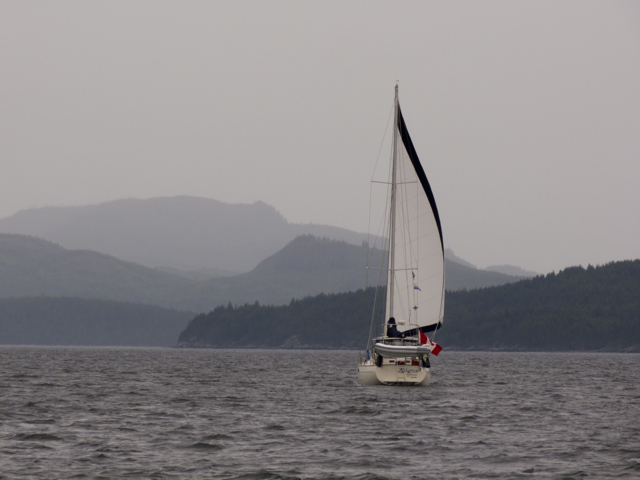 It smirked at us, almost smiled, but did not bare its teeth.  We raised the jib and motorsailed through the short choppy grey waves and a blue landscape–blue hills, blue-grey skies, a watercolour mist, then rain.  Alongside us, gulls hitched a ride on breakaway logs from a boom and then, near the Broken Islands, we passed through a leaping school of dolphins.

We turned up Havannah Channel, doused the sails and motored through a few tricky narrow passages; there we were, finally in the fabled Broughton Islands, the destination of so many sailors headed north of Desolation Sound and its boundary rapids.

We motored in the rain past rustic homesteads, past a big new almost finished house with a grand FOR SALE sign on the porch, and into Chatham Channel. It was narrow, shallow and kelp strewn; you had to line up the range markers to find the center channel in the east end.  The current tore through the narrows, and carried us along with it.

There too, in front of a clearcut, we noticed an advertisement: “Waterfront property for sale.” Was this a resale by timber companies (what do you do with land you’ve stripped of all industrial value?) or an effort to enlarge the neigborhood?  How would you even get to your dock when the current was running hard against you? For which potential buyers were these signs posted?

We were passed in the channel by a large American cabin cruiser towing a salmon fishing vessel–perhaps the for sale signs were for them.

Passing a cabin cruiser in the channel

Cutter Cove was nearby, around the corner from a dockside sign reading, Chatham Channel Post Office and General Store. We crept into the cove and dropped anchor in the rain.  Debris from an old logging operation cluttered the beach; above us stone walls loomed and dripped.

Cutter Cove in the rain

As we sat in the cockpit and watched the rain fall, a large service boat made its way into the anchorage. Forest Products was written on the side of the vessel.  It was piled high with huge bales wrapped in white plastic and wooden pallets. Maybe he has ice cream, Marike joked.

The vessel approached, circled us, and headed back out of the cove.  Turn the radio on, Karin said, maybe he has something to say, so Marike hailed him.

That’s how we discovered that the skipper of the Forest Products boat was a sailor himself.  From Pender Harbour, he’d always wondered if Cutter Cove would be a good place for a sailboat.  How is it in a southeasterly? he asked.

We, having just arrived, had not a clue.

Marike asked him what he was carrying.  Fish food for the fish farms, he answered; I’m sure you saw plenty of them on your way up here.

Yes, he said, a clear note of sadness in his voice.

Marike asked if fish food was mostly what he hauled, or did he also carry other things.

No, these days mostly fish food. He sighed, then said sadly, sign of the times I guess.

Marike cajoled him a bit, oh well, at least you’re not stuck in an office.

You’re right about that! he said and then departed, wishing us fair winds and a fine and safe voyage.  His heartbreak at the destruction he was privy to and trapped within palpable; it remained, a ghost hovering over us.

Our first local conversation and it was already clear, almost nothing else was going on on these shores.

But which had come first, industrial exploitation or depopulation? Opportunities to think about this question would be just around the corner.

Karin Cope lives on the Eastern Shore of Nova Scotia. She is a poet, sailor, photographer, scholar, rural activist, blogger and an Associate Professor at NSCAD University. Her publications include Passionate Collaborations: Learning to Live with Gertrude Stein, a poetry collection entitled What we're doing to stay afloat, and, since 2009, a photo/poetry blog entitled Visible Poetry: Aesthetic Acts in Progress. Over the course of the last decade, with her partner and collaborator Marike Finlay, Cope has sailed to and conducted fieldwork in a number of remote or marginal coastal communities in British Columbia and Mexico. Their joint writings range from activist journalism and travel and policy documents, to an illustrated popular material history of the Lunenburg Foundry entitled Casting a Legend, as well as their ongoing west coast travel blog, West By East.
View all posts by Karin Cope →
This entry was posted in 2012 and tagged Chatham Channel, clearcuts, fish farms, resource exploitation, the Broughtons. Bookmark the permalink.