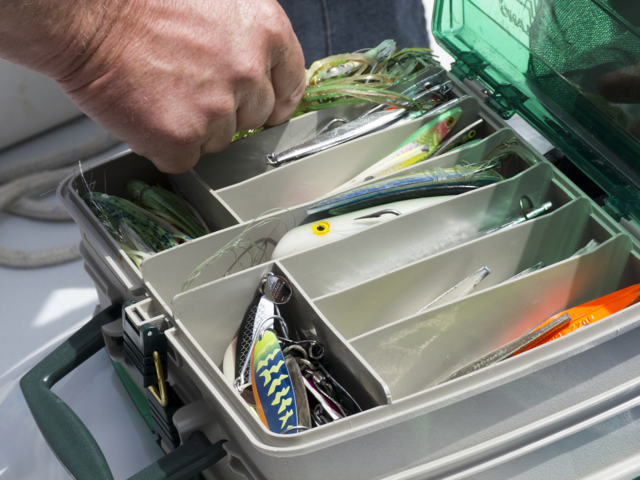 The entire time that Quoddy’s Run plied the coastal waters of Central America and Mexico, we refused to fish.  The skipper did not want fish blood and guts all over the deck, and we all thought it better to buy from or trade needed goods with local fishermen.  We did not like the attitude of many North American cruisers in the south, where fishing was just another way of getting something for nothing. 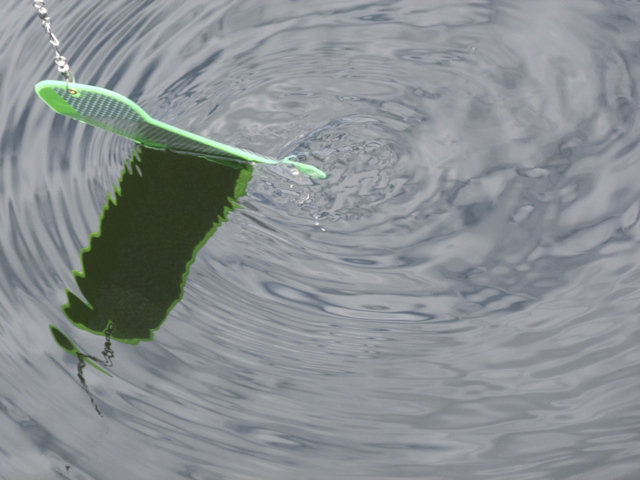 But now we have a boat repair debt and we’re hungry for protein.  Beans and rice and pasta can only take you so far, especially when it’s cold.  In Nanaimo, we asked the chandler to outfit us with Fishing 101 equipment—gear that would not be frightfully more dear than the value of the fish we might catch.  There it was then, a pole, a line, a reel, all bundled together, a real deal.  But then you need something called a flasher or dodger—a long flat shiny thing designed to whirl in the current and mimic schooling herring, thereby catching the salmon’s eye.  You need a sinker to take the line down, some spoons that fall like wounded herring when you jig, or a “hootchie,” a rubbery cross between a large mosquito and a tiny octopus in varying colours.  That’s for trolling salmon, if and when the salmon are running. 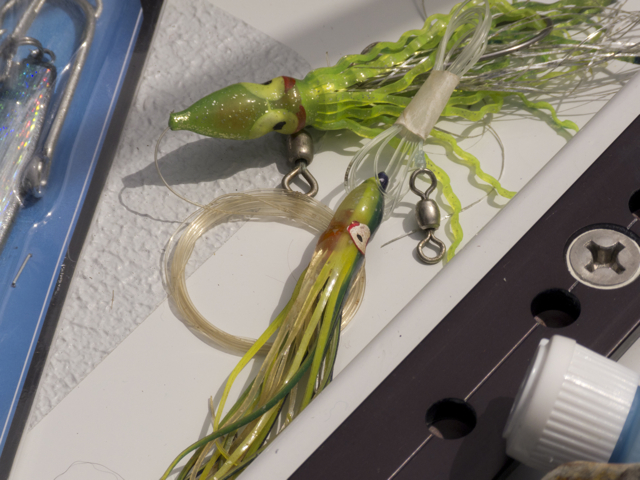 Our first hootchies–gifts from Rick

If you know how to tie a rudimentary fisherman’s knot you may use the same rod to jig for rockfish, lingcod, greenlings—maybe even, heaven forbid, a large halibut.  If you catch one of those or a dogfish, which is really a small species of shark, set it free before it sinks your dinghy.

Finally, we learned, you need a net, a large net, in the unlikely event that you have some success in catching a fish.  Oh, and a fishing license of course, with a salmon stamp, since they don’t cost much, and you might as well be hopeful.

Skeptically, we brought our gear back to the Quoddy’s Run and stowed it all in Elisabeth’s berth until she arrived, but we admit it confused us.  Fishing was at this point all abstract instruction, theory and story really.  What do you really do with the stuff?  How do you use it? What do you do if you really catch something?  And how do you know what you’ve caught—and what to do with it then?

Happily, our friend Rick, aboard Kalagan, is an avid fisherman.  His wife, Dawn, who keeps us supplied with books about BC—she’s the secret research arm of these blog entries—volunteered Rick to give us fishing lessons.  Somehow, he knew we wouldn’t even have a copy of the BC regulations (we hadn’t even known enough to ask for it!), and gave us his double. 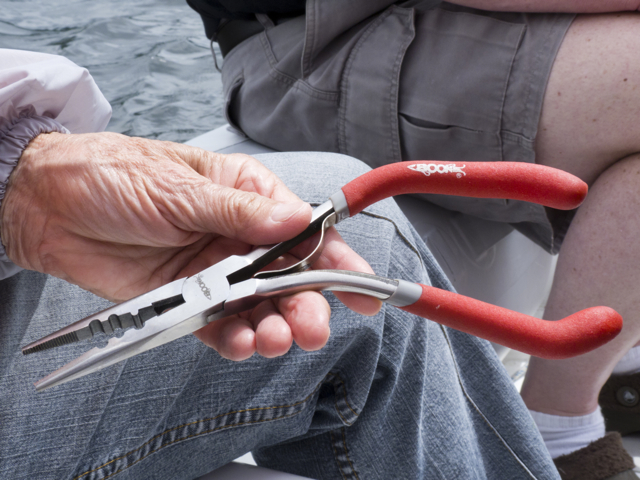 Another necessary: pliers to remove a hook before you throw the fish back

First he showed us how to connect our bits and pieces for trolling.  Attach your reel holders off to the side of the stern (they’d come with the boat and we’d never imagined we’d use them!).  Hook up the weight, then the dodger then the spoon on your line.  Pay out as much line as you think the fish are deep—hmm…now how are we going to know that?  Okay, Rick says, showing us, pull like this 30-50 times. Then go along in your sailboat or dinghy at about 3-4 knots, changing speed every once in awhile just to keep things interesting.

Now, for jigging. Isn’t that what maritimers used to do for cod before there were no more cod?  You jig for groundfish, not salmon. To jig, you have to cut all of the trawling trinkets off and tie on a jigging lure.  Then let your line out until it hits the bottom. Reel it in a few feet and start jigging—jerking up on the line so that the lure moves like a wounded fish.  They strike at those first.

So much for theory; now it was time for practice. 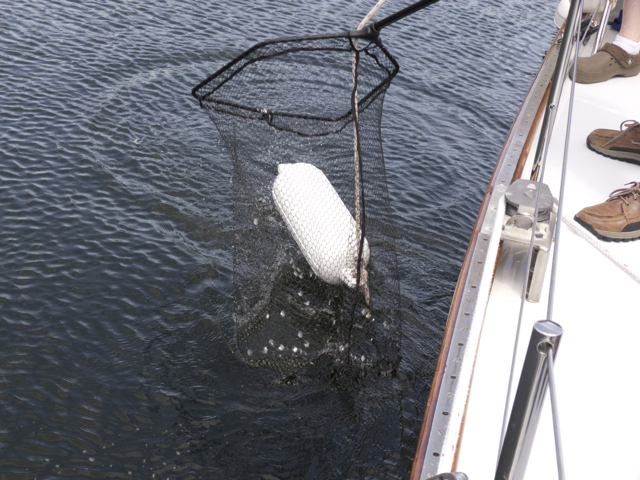 Netting exercises–“go for the head of the fender!”

First we practice netting a fish headfirst, using our fender as the fish. Then we all pile into Rick’s dinghy and trolled outside the anchorage.  Yikes, the moving water tugs at the line as if something were on it.  If you catch weed, clear it off and start over again; fish don’t bite a weedy spoon or hootchie. 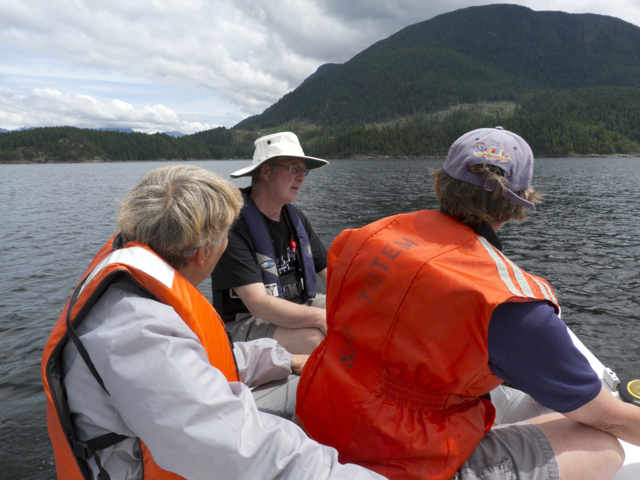 Nothing biting. Change over to jigging gear.  We go over to the rocks and start jigging.  Right away a strike!  Pull up the line fast to set the hook then it in. A little rock fish, illegal to keep here. Release it and move somewhere new.  A small lingcod—it spins. Use pliers to manipulate the hook and release the fish so that neither you nor it is wounded. 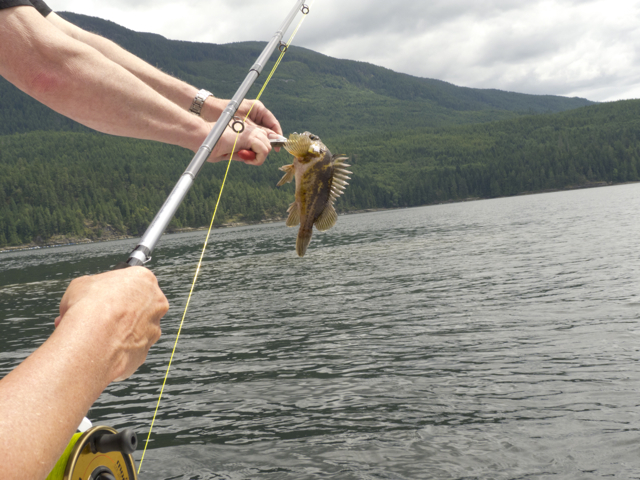 That’s it; that’s our lesson.  We still don’t believe we’ll catch anything to eat.  But Skipper Marike, who tends towards impatience, has found, while waiting for crew to finish their tasks and begin a newly proposed activity, that jigging while waiting is a bit like meditating. 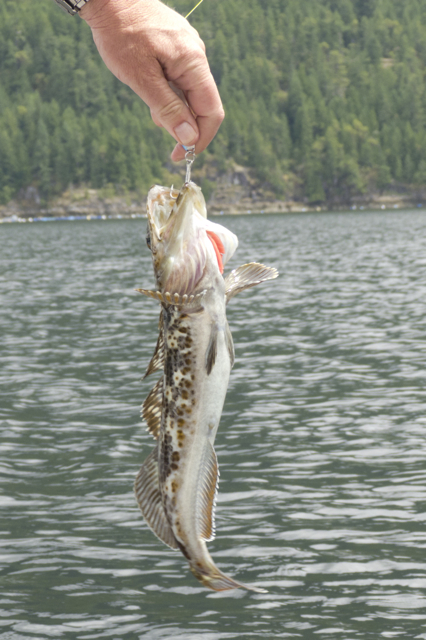 In Teakerne Arm, Marike was jigging in the rain one morning when she got a strike—something big and strong pulling the line under the keel.  Excitement.

“I’ve got something!”  Karin and Elisabeth came running, reaching for net, pliers, camera….which should be deployed first?

When the fish came to the surface we gawked down at it.  What is it? Look at that mouth—a lingcod!  Is it big enough to keep? A quick look at the regulations: minimum length, 63 centimeters, how long is that? (Longer than Karin’s arm, it turns out.)

Of course, while we hesitated, the lingcod gave a mighty thrash and got away.  Phew!  We too were off the hook!

So Marike dropped the line in the water again. Another strike! This time we tried to net the fish, but again it got away, and again, we were relieved not to have to deal with such a large and thrashing thing.

The line went down again, and there we were, a third strike, an enormous lingcod.  But it too got away, and so did we.

Obviously, we were not hungry enough yet. 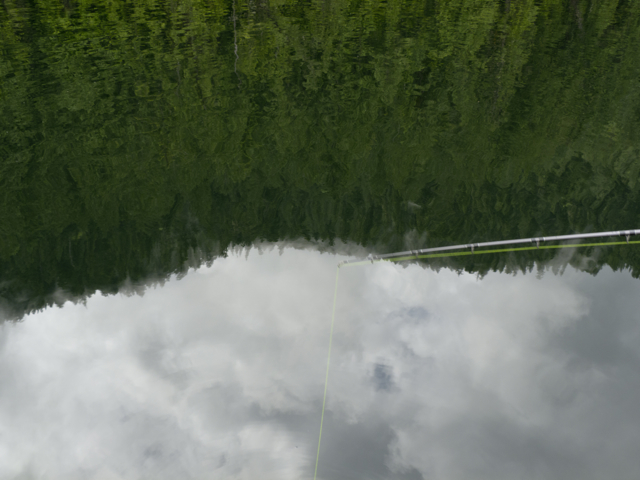 Karin Cope lives on the Eastern Shore of Nova Scotia. She is a poet, sailor, photographer, scholar, rural activist, blogger and an Associate Professor at NSCAD University. Her publications include Passionate Collaborations: Learning to Live with Gertrude Stein, a poetry collection entitled What we're doing to stay afloat, and, since 2009, a photo/poetry blog entitled Visible Poetry: Aesthetic Acts in Progress. Over the course of the last decade, with her partner and collaborator Marike Finlay, Cope has sailed to and conducted fieldwork in a number of remote or marginal coastal communities in British Columbia and Mexico. Their joint writings range from activist journalism and travel and policy documents, to an illustrated popular material history of the Lunenburg Foundry entitled Casting a Legend, as well as their ongoing west coast travel blog, West By East.
View all posts by Karin Cope →
This entry was posted in 2012 and tagged Desolation Sound, fishing, lingcod. Bookmark the permalink.

2 Responses to Fishing Lessons I