To the Trapper’s Cabin (Accidental Geocachers)

Sunrise at the dock in Princess Louisa Inlet

As soon as we docked at Princess Louisa, everyone asked, “are you going to the trapper’s cabin?”  We had no idea what they were talking about—the trapper’s cabin?  Apparently some distance upward was a cabin, a ruin now perhaps.  There were all sorts of stories about it—how rough the route was—and then some signs warning that the way was difficult and not recommended.  They were not quite as serious as the sign by the falls that warned that 12 people had died trying to climb up the slippery rocks alongside the roaring water, but they were clearly meant to dissuade casual hikers.

That’s not too hard is it?

The day after we arrived, we met a couple of sailors up from Oregon and Washington; they were going to try the hike up to the fabled cabin, did we want to go?  Karin said yes, but Marike, who suffers from vertigo, hesitated and decided not to go. The way down might be worse than the way up….It usually is.

Later, we realized we’d read about the way up to the trapper’s cabin in Muriel Wylie Blanchet’s wonderful book, The Curve of Time, her account of the summers she and her children spent in the late 1920s exploring BC waterways aboard their 25-foot motor cruiser, Caprice.

Falls by the cabin dropping to the sea

As she tells it, “…there is an old skid-road—small logs laid crossways to make a road to skid the big logs down to sea, with a donkey-engine and cables. The skid-road goes up to about six hundred feet—back the way the old glacier had retreated… 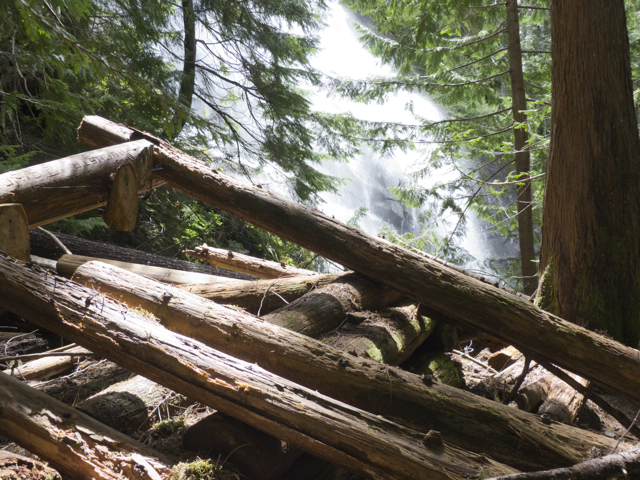 Arriving at the trapper’s cabin

“Six hundred feet high doesn’t mean that you get there by walking six hundred feet.  It must have been two miles back to the little trapper’s cabin at the end of the skid-road. The road slanted at quite an incline…I’m sure it was nine times 600 feet before we stand panting beside the cabin…We drank from a running stream, we bathed our faces and arms in it, and bathed our feet in it while we emptied the earth and gravel out of our running shoes” (14, 88).

Falls by the trapper’s cabin

The route began on the remains of that skid road, which was rickety and rough, then disappeared into new growth.  The way was steep—a climb nearly every step up (and so a descent nearly every step back) through creek beds and cedar roots and over rocks.  One sheer face offered a rope attached to a tree above as a handhold. We clambered over and under deadfalls, past roaring creeks, lightening struck trunks, Devil’s Club, new growth, herbaceous dogwood, birds singing all around us.  As the roar of Chatterbox Falls fell away, we became conscious that we were moving gradually towards a new roar.  We climbed steadily for an hour and 50 minutes, up and up and then we saw it, a pile of nail-studded tumbled logs, a carved lintel, two narrow bedsteads—the trapper’s cabin.  Above it, a steep moss covered lip dripping with moisture, and to the side, another thundering cascade.

We made our way gingerly to the edge and then out onto a dry platform of rocks.  Above us, roaring tumbling water dropping from the top of the mountain; below us, a winding narrowing tumbling cascade disappearing into the trees. And out in front of us, the narrow channel of Princess Louisa Inlet.  We could see all the way down the inlet, out Malibu Rapids, and into the flat water of the Queen’s Reach.  Two snow-covered mountains stood sentry on either side of the gap–one scarred with logging roads through the snow, all the way to the top—whitening cloud above.

View down into the inlet

We stopped for lunch on the wet logs of the tumbled down cabin, and then turned to head back down.  But there, under the overhanging lip behind the cabin was a rocky shelf where a little green plastic box was hidden—a geocache, begun in 2010. The box contained handwarmers, several coins including a Panamanian balboa, a bottle key and the sodden remnant of a joint.  We added our names and ports of hail to the list, and left behind a little  bag, but did not remove anything.  Then back the way we’d come, slipping and sliding—we each fell more than once before we made it down to the docks, exhilarated, muddy and damp.

Gary and Ron discover the geocache

Karin Cope lives on the Eastern Shore of Nova Scotia. She is a poet, sailor, photographer, scholar, rural activist, blogger and an Associate Professor at NSCAD University. Her publications include Passionate Collaborations: Learning to Live with Gertrude Stein, a poetry collection entitled What we're doing to stay afloat, and, since 2009, a photo/poetry blog entitled Visible Poetry: Aesthetic Acts in Progress. Over the course of the last decade, with her partner and collaborator Marike Finlay, Cope has sailed to and conducted fieldwork in a number of remote or marginal coastal communities in British Columbia and Mexico. Their joint writings range from activist journalism and travel and policy documents, to an illustrated popular material history of the Lunenburg Foundry entitled Casting a Legend, as well as their ongoing west coast travel blog, West By East.
View all posts by Karin Cope →
This entry was posted in 2012 and tagged geogache, Muriel Wylie Blanchet, Princess Louisa Inlet, The Curve of Time, trapper's cabin. Bookmark the permalink.