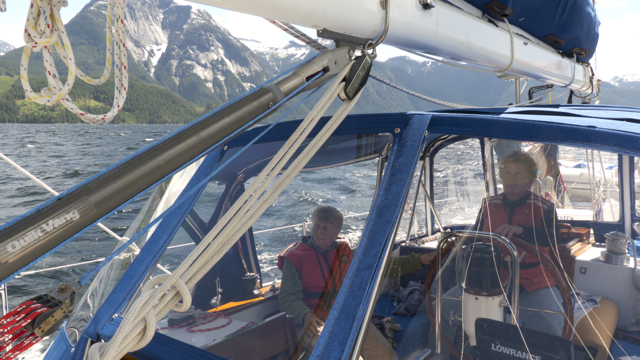 The crew never did stop exclaiming at the view

No matter where we went or what we felt or observed, no matter how new to us our experiences were, no matter how solitary the voyage seemed, we were never alone. Wherever we arrived hosts of others had already or always been. Echoes abounded everywhere in and on both water and land.

As we cruised up the narrow winding ribbon of Jervis Inlet, the sea seemed to part the mountains for us.  They lifted directly from the sea, forested, with sheer cliffs mossed in bronze. Across their glittering snow peaks travelled dark shapes of cloud shadows. Nearer peaks merged with higher neighbors beyond, but the face they presented to us was complete. Sharp spires reached into the clouds and from the heights our eyes could follow one long sweeping line to the Pacific.

Never until then had I seen a mountain whole.

As we went further lofty mountains took more complete possession.  We stared back at a reach behind us and the way by which we had come was hidden. The peaks had closed in.

“This-this-“ I tried to find words.

“After a summer of it”, Robert said, “you’ll get peeved when I call you from the galley to have a look. We’re only beginning.”

Citation from Kathrene Pinkerton, Three’s A Crew (1940), about a voyage undertaken in 1924. Reprinted by Horsdal and Schubart in Vancouver in 1991.

Karin Cope lives on the Eastern Shore of Nova Scotia. She is a poet, sailor, photographer, scholar, rural activist, blogger and an Associate Professor at NSCAD University. Her publications include Passionate Collaborations: Learning to Live with Gertrude Stein, a poetry collection entitled What we're doing to stay afloat, and, since 2009, a photo/poetry blog entitled Visible Poetry: Aesthetic Acts in Progress. Over the course of the last decade, with her partner and collaborator Marike Finlay, Cope has sailed to and conducted fieldwork in a number of remote or marginal coastal communities in British Columbia and Mexico. Their joint writings range from activist journalism and travel and policy documents, to an illustrated popular material history of the Lunenburg Foundry entitled Casting a Legend, as well as their ongoing west coast travel blog, West By East.
View all posts by Karin Cope →
This entry was posted in 2012 and tagged Jervis Inlet, Kathrene Pinkerton, mountain views. Bookmark the permalink.