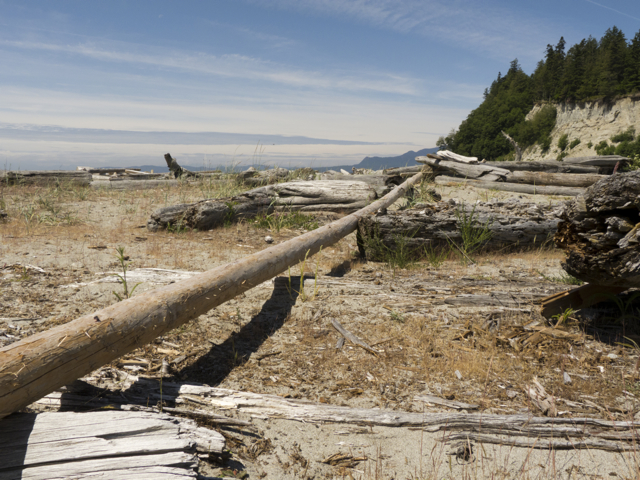 You think that Buccaneer Bay will be about pirates and adventure. That such a place will be full of stories of hideouts and near escapes, buried treasure, smuggled goods and secret knowledge of the winds.  Think again.

Marike stands on a washed up bit of log boom

Buccaneer Bay “was named in 1860, after the racehorse Buccaneer, a contemporary of Thormanby. He did not especially distinguish himself as a three-year-old, but in 1861 won several good races, including the Royal Hunt Cub at Ascot, Thormanby winning the Ascot cup the same year.  See Thormanby Islands.” 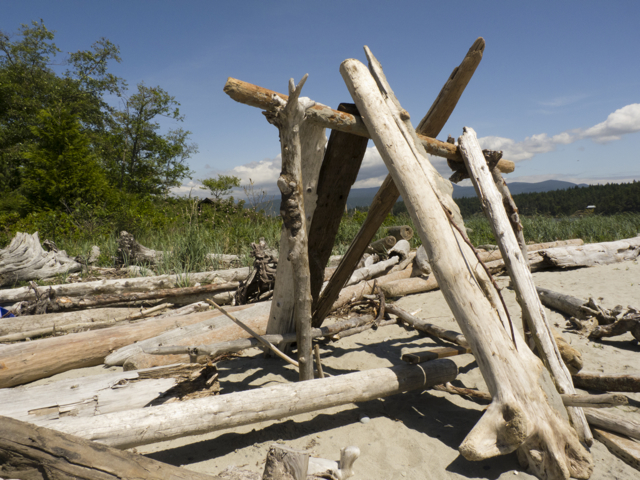 That’s our friend, Captain John T. Walbran again, Yorkshire native and retired officer of the Canadian Pacific Navigation Company and then the Canadian Government Steamship Quadra, writing in the first decade of the twentieth century.  His compendium, British Columbia Coast Names: Their Origin and History, is a sort of hilarious traveller’s bible,  “a treasury of biography, history and anecdote” for the empire-minded, a record of British homesickness and imperialism at its finest and trivial worst–military rank, social class, famous relations and numbers of guns all scrupulously noted.  First published in 1909 thanks to the assistance of a federal cabinet minister, the volume was reissued in 1971 in celebration of the centennial of British Columbia’s entry into Canada.  It is aptly described by its then introducer, Professor G. P. V. Akrigg (Department of English, UBC), as “sometimes prolix, sometimes eccentric, but always thorough…the foundation work on the origin of our British Columbia place names, an amazing grab-bag of history…a splendid book in which to browse.”

Thus informed about the source, let us continue.

After the race-horse Thormanby, winner of the Derby in 1860, owner Mr. J. C. Merry, ridden by the well-known jockey, Custance. The names given on the Thormanby islands are all connected with the turf, which see: Buccaneer bay; Derby point; Epsom point; and Oaks point, and also Merry island; Surrey islands; Tattenham ledge; and Welcome pass. Named by Captain Richards and the officers of H.M. surveying vessel Plumper, 1860” (Walbran, 486).

Today, apparently, descendants of Mr. J. C. Merry live in Vancouver.  Merry Island light warns against reefs that surround the island; the station also tracks weather, wind and sea states.  On Sunday, 10 June, at 7:30 am, the Coast Guard reported that a log boom had come apart in the vicinity of Merry Island, and approximately 70 logs were adrift south of the island.  We saw several of them spiralling by in the current.  A heron had hopped a ride aboard one, an eagle another, and several seagulls clung to yet another.  It seems that for a bird a tree is to hold, whether horizontal or vertical. Like us, they make do where they can.

Elisabeth–and double pleasure on the beach

Just so, the British surveyors of the 1860s scattered familiar characters across the landscape; apparently if you’re an imperial nomenclaturist, a place is well named if it sounds like something from home. That’s why they overwrite the landscape, domesticate it thus, tossing away former names like so much detritus.  Fortunately places may retain more than one name–each place a different place to its various visitors and inhabitants.  The Sechelt name for this bay is Klay-ah-kwohss.  Or so we understand, although we are not confident about the Indigenous linguistic accuracy of our shipboard imperial resources.

Another really huge chunk of driftwood

Karin Cope lives on the Eastern Shore of Nova Scotia. She is a poet, sailor, photographer, scholar, rural activist, blogger and an Associate Professor at NSCAD University. Her publications include Passionate Collaborations: Learning to Live with Gertrude Stein, a poetry collection entitled What we're doing to stay afloat, and, since 2009, a photo/poetry blog entitled Visible Poetry: Aesthetic Acts in Progress. Over the course of the last decade, with her partner and collaborator Marike Finlay, Cope has sailed to and conducted fieldwork in a number of remote or marginal coastal communities in British Columbia and Mexico. Their joint writings range from activist journalism and travel and policy documents, to an illustrated popular material history of the Lunenburg Foundry entitled Casting a Legend, as well as their ongoing west coast travel blog, West By East.
View all posts by Karin Cope →
This entry was posted in 2012 and tagged BC Coast names, log booms, Sunshine Coast. Bookmark the permalink.