Racing over the water through Dodd Narrows

The west coast offers some novel challenges to sailors like us who have arrived from elsewhere.  In particular, the mix of tides, currents and wind in the numerous narrow straits and passages of the waters between Vancouver Island and the mainland makes for thrilling, potentially risky and historically, often deadly encounters.  Better instruments, weather prediction, and helpful guides and aids have reduced the risks, but, as one of our guidebooks says, “A working knowledge of tides and currents, and their interplay with the wind, is especially important in this region” (A Dreamspeaker Cruising Guide to Desolation Sound and the Discovery Islands, 5).

The first professional skipper we met here told us to go out right away and buy the current edition of Ports and Passes, a hefty 590-page ringbound yearly that details tides, currents and services available from Olympia, Washington to Prince Rupert BC.  We did, and now we wouldn’t dream of navigating these waters without a copy.

Sometimes the book is quite bossy, but in a helpful way: “When traveling through Gillard Passage and the nearby areas of swift current, including Yaculta (pronounced: yew-cah-taw) and Dent Rapids, one must respect the currents. Timing is very important, even for a fast boat…Strong tidal streams with overfalls, and sometimes violent eddies and whirlpools will develop in the period between 2 hours after the turn to flood and 1 hour before the turn to ebb…When northbound, plan to overnight between Dent Rapids and Green Point…” We try to follow its instructions scrupulously.

The first narrows we transited when we arrived in BC was the Dodd Narrows.  It is a very narrow little passage–perhaps 60 meters wide at its slimmest point—and contains a slight dogleg.  It is, however, the straightest way to get from Nanaimo to the Gulf Islands and southern Vancouver Island, or vice versa in a small or moderate sized craft. 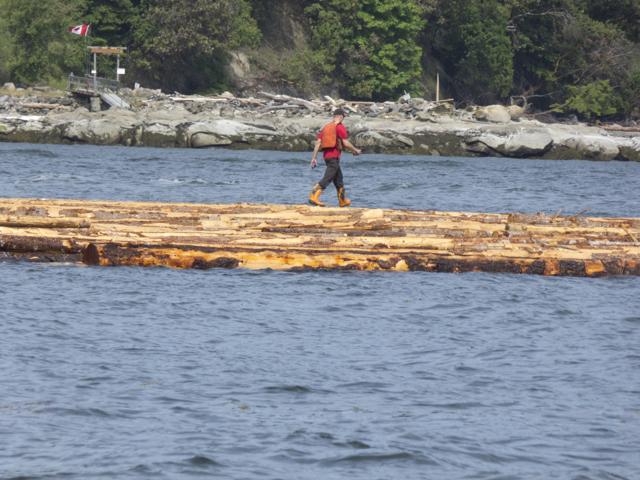 Depending on the lunar cycle, currents can ebb or flow in the Dodd Narrows at up to nine knots, or nearly 150% of our usual motoring speed.  (Further north, the Nakwatkto Rapids can run at up to 20 knots, which is nearly three times our typical motoring speed.)  Timing is, obviously, everything.  Even a current of three knots will throw the boat around and can make it considerably harder to steer. A current of 5 knots against us will virtually stall us; more than that and we may move backwards.  Add the complications of transiting these narrows with tugs pulling logbooms or inconsiderate powerboats that zip through at high speed and hit slower boats with noxious wakes, and you get a sense of the drama that a passage can involve.  “Whitewater sailing” some of our friends call it. Those in lighter boats with a great deal of experience even cultivate the challenge of racing through rapids at high speeds, sometimes under sail.  Now and then, however, the instructions will be explicit: “Do not attempt to transit this passage under sail.”

We’re now old hands at transiting the Dodd Narrows—we even let ourselves put up a sail, and wait until we’re past slack and can pick up a little push.  The rushing sound of the water, and the little eddies and whirlpools that knock us about are rather exciting, not part of the usual repertoire of a big heavy old fashioned cruising boat like Quoddy’s Run.

We hear others announce their arrival at the Narrows on the radio: “Securité, securité, securité. 32-foot motor vessel, Can Do, heading north through Dodd Narrows. Any concerned vessels, please respond on channel 16.”

And then it is our turn.

Karin Cope lives on the Eastern Shore of Nova Scotia. She is a poet, sailor, photographer, scholar, rural activist, blogger and an Associate Professor at NSCAD University. Her publications include Passionate Collaborations: Learning to Live with Gertrude Stein, a poetry collection entitled What we're doing to stay afloat, and, since 2009, a photo/poetry blog entitled Visible Poetry: Aesthetic Acts in Progress. Over the course of the last decade, with her partner and collaborator Marike Finlay, Cope has sailed to and conducted fieldwork in a number of remote or marginal coastal communities in British Columbia and Mexico. Their joint writings range from activist journalism and travel and policy documents, to an illustrated popular material history of the Lunenburg Foundry entitled Casting a Legend, as well as their ongoing west coast travel blog, West By East.
View all posts by Karin Cope →
This entry was posted in 2012 and tagged Nanaimo, Narrows, Rapids, whirlpools, whitewater sailing. Bookmark the permalink.